INSIDE THE ‘GAME OF ASSASSINS’ WITH MATT ESKANDARI

Press Pass LA sat down with Director Matt Eskandari to chat about his action/horror film Game of Assassins (formerly titled The Gauntlet) which is being released by Lionsgate September 23rd on DVD. The film stars Bai Ling (Crank), Warren Kole (The Following) and Dustin Nguyen (21 Jump St).

Game of Assassins was co-financed by Chinese film production partners and shot in Beijing and tells the story of five strangers who awake in an underground, medieval dungeon.It’s produced by Matt Eskandari, Wellington Sun, Daniel Wei, Jonathan Shih, and Adam Lawson. 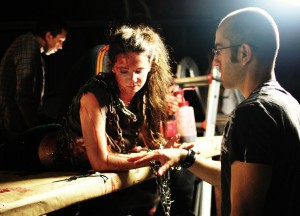 We spoke with Eskandari about the challenges of making a successful low budget film in today’s industry  and what’s next for him as a director.

PPLA: Tell me about how Game of Assassins came about. Where did the idea come from? How long was the shoot for this film and what was the budget?

ME: It was an arduous and surreal odyssey getting this film made from concept to screen. We had a very ambitious script, an international shoot set in China, only 20 days and a tiny 500K budget to work with — quite the up hill battle! It’s important for a director in those circumstances to have a clear vision, and an ability to maximize the production value, while making quick decisions on-the-fly. The reality is you’re always having to pick your choices carefully in those situations. Pre-planning, rehearsals with actors and pre-visualization helped immensely, as did an understanding of the aesthetics and style to create the epic scope and immensity with as little money as possible. The fact that everyone is blown away with what we achieved, knowing what little we had, definitely gives me a feeling of redemption for all the hard work.

PPLA: Since you shot this on a micro-budget, what were some of the biggest challenges in planning for the shoot or that arose during filming?  Did you have any moments where you thought, this isn’t going as planned? 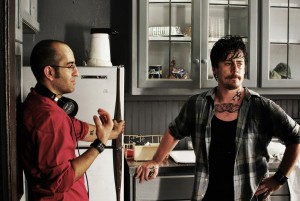 ME: The entire film was a challenge, but if I wanted to dwell on it anymore I could write a book titled, “Surviving The Gauntlet.” Nothing really went as planned from losing backup footage to an unscrupulous production company stealing our original negatives.

My biggest regret is that the film didn’t come out earlier, but I stayed passionate about it and never gave up no matter how insurmountable the obstacles. There was a period when it was only me, my editor Ryan Cooper, and main producer Wellington Sun left trying our best to finish the film. It was truly grueling looking back, but we stuck it out to the end because we believed in the film and what we had created together.

PPLA: How did you decide casting for this film? Was the cast previously trained or did they do any stunt or general training for some of the rather physical scenes? Did you have actors in mind for the roles prior to the casting process?

ME: We held open auditions for all the parts and had the pleasure to meet some interesting choices for the characters. Dustin Nguyen and Bai Ling were the only actors who didn’t audition. I was already familiar with their work and offered them the roles when I heard they were interested. They did a phenomenal job and really elevated the characters with nuance and passion. The actors all had some prior stunt experience, but we had a professional stunt coordinator from Hong Kong who put them through the meat-grinder. Thankfully, all of the cast were open to getting down and dirty and really let lose in the film.

PPLA: You premiered last year at Scream Fest and won several awards on the festival circuit. What was that experience like? What was the process from taking it to festivals to securing distribution.

ME: It was rewarding to get to see the film with real audiences on a big screen. Festivals give us an opportunity to meet real fans of cinema who appreciate film not just as entertainment, but as a real art form. Getting the awards we did was just a nice icing on the cake and redemption for all the years of hard work that went into the film. I had always imagined Lionsgate would be the ideal distributor and wasn’t surprised when they scooped it up for release. Hopefully, this gives the film the much needed attention is deserves. 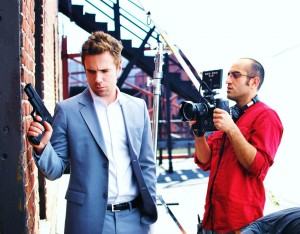 PPLA: How did the film change once Lionsgate came on board (title, editing, marketing etc.)?

ME: To be honest I’m not 100% happy with the marketing campaign and re-titling of the film, but there’s nothing I could do. At some point you do your job as the director and producer and move on and wash your hands clean. Unless you have the clout to make demands it’s better to let the distributor handle their part of the equation and stick to what you do best. It doesn’t serve the film or yourself to bicker over elements that you have no control over. Ultimately, good work will speak for itself.

PPLA: Any advice to other up and coming filmmakers breaking into the horror genre and world of indie-filmmaking?

ME: Interesting question, since I see myself as an up and coming filmmaker. Maybe I can answer this question better one day when I have a little more perspective, but from my own experience it’s perseverance and resilience that are the two best qualities of a filmmaker. Just go out there and create our own opportunities in life and never wait for someone else to give you permission to do something you really love. If you believe in yourself then you just have to put in the hours of hard work and make the most out of every opportunity. There will always be the difficult years where you’re struggling to hone your craft, but we all would be wiser to dwell on the journey rather than the end destination.

PPLA: What’s next for you as a director/producer? Are you in pre-prod on a new film already? 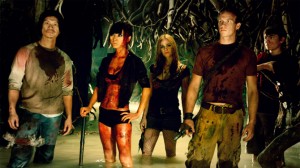 ME: There’s still so much I want to do and so many stories I’m dying to tell. I have a few scripts in development right now and in the process of branching into more genre work. It would be great to direct a film for Blumhouse or Platinum Dunes. I’m a big fan of their productions and I’m confident my style would really compliment one of their films. Jason Blum or Michael Bay if you’r reading this, lets get some lunch!