There was no shortage of stars out on Hollywood Boulevard for the Insidious Chapter 3 premiere. The women of the night: Lin Shaye, Stephanie Scoot and Hayley Kiyoko looked absolutely stunning as they graced the carpet with the dresses fit for a scream queen. 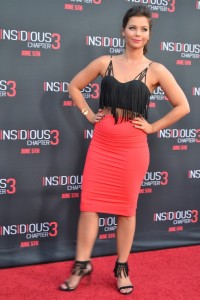 The Black Bride made an appearance and was not camera shy. She was snapping pictures and “strangling” her castmates! Other stars making an appearance included: Jodi Sweetin, Corbin Bleu, Aaron and Austin Rhodes, Sophie Simmons and many more.

The third installment in the horror franchise takes us back to the beginning. Lin Shaye who plays “Elise” in the film reprises her role as a main character fighting off her demons to save “Quinn” played by Stephanie Scott. Quinn lost her mother about a year ago and struggles to get by as her father “Sean” played by Dermot Mulroney tries to keep the family together. Quinn gets in a freak accident breaking her neck and two legs and is bedridden. While in the bed she is attacked from an evil demon from the other world. 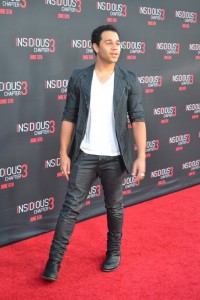 “Scaring them in the middle of the take doesn’t always work but it pushes them more into their character,” said producer Jason Blum. “We try to do everything we can even if it means getting rid of financial support.” 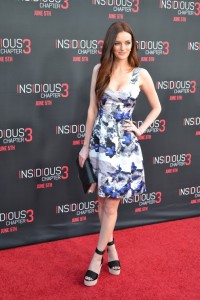 Sean tries to understand what is going on with his daughter but has a hard time grasping the fact that there is an evil force after his daughter. After a few incidents and visual proof, Sean seeks out Elise to try to save his daughters life. At first, Elise is reluctant to go into the other world again as she is still scarred by her husbands death.

“Turning into this beautiful brutal hero was amazing and was the most fun I had acting,” Shaye told Press Pass LA.

Will Elise help Quinn get rid of her demons and will Elise scare off her own demons? Be sure to check out the film opening tomorrow, June 3rd in theaters everywhere.