Unless you’ve been living under a rock the past month you know that The Interview has become far more than just a movie.

After the now infamous Sony hack as a response to the film’s release it was questionable if anyone would ever get to see the movie in any form, for good or bad. But Sony didn’t back down and the film has seen a limited release both online and in select theaters. The mere act of watching the film can now be seen as a sign of rebellion.

Given all of that, the question remains as to whether the film is any good. That answer is a little complicated. No one will tell you it is genius, but there’s a lot more going on below the surface and it ends up being a pretty smart film. 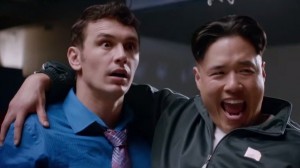 James Franco and Randall Park in The Interview.

The plot revolves around the egotistic and vain Dave Skylark (James Franco) and his producer best friend Aaron Rapaport (Seth Rogen). Skylark is the host of an E! Entertainment-style TV show and somehow has the ability to get even the most guarded celebrities to open up and share big secrets (I’m looking at you Eminem). After being called out for not producing real news Rapaport is thrilled to find out that North Korean dictator Kim Jong Un is a huge fan of the show.

Leveraging that they both decide to take a chance and reach out to President Kim about being on the show. Much to everyone’s surprise, he agrees. What follows is a hilarious movie that isn’t afraid to talk about some very touchy subjects. Often veering down some strange paths the film has no problem with alienating both Americans and North Koreans, something that deserves applause. While the style may have been different Mel Brooks was doing the same kind of thing 40 years ago and no one batted an eye. Context is everything.

Sadly the worst part of any Franco/Rogen movie is the presence of James Franco. As the showman Dave Skylark he’s at his most annoying. Seth Rogen on the other hand shines as the straight man and delivers one of his best performances to date. The other major player in the film is Randall Park as President Kim. Park’s performance is not only totally funny but also heartwarming at times, something very unexpected. The movie somehow finds a way to humanize the dictator in a way that has never been done before.

It is unclear how long Sony is going to be keep The Interview in theaters and online but hopefully it will get a proper DVD release as well. For all its stupidity the movie comes out as a smart, often controversial, look at a country in peril. One should not dismiss the film merely because it is a comedy. Sometimes comedy is the only way to deal with the horrors of humanity.