J.J. ABRAMS SHOWS HIS SUPPORT FOR WOMEN IN CINEMA AT THE ARCHER FILM FESTIVAL

This Wednesday director J.J. Abrams spoke on the power of women in cinema at the 5th Annual Archer Film Festival in Culver City, CA.

The festival, which was created by the Archer School for Girls, is meant to empower young women and teenagers around the world through film. Hundreds of entries were sent in from high schoolers, pushing the limits of what could be done on a limited budget and with minimal time. A total of 15 films, ranging from PSAs to dramas, were shown Wednesday night highlighting just how much talent is out there. 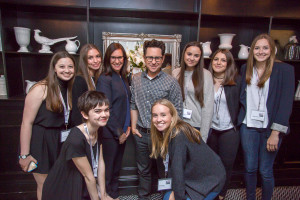 J.J. Abrams shows his support for women in cinema at the Archer Film Festival.

“I think one of the most exciting things about speaking at the Archer Film Festival is seeing so many young people, that just happen to be women, that are determined to destroy the stereotypes of gender. It is an incredibly inspiring thing,” Abrams told Press Pass LA. “I think it is clear both behind and in front of the camera that the age of it being just the white male on the center stage in a vast majority of media is over. When you see these young women who are simply going to do it you realize it is just a matter of time before this conversation will be mute.”

That was never more evident than in the films that hit the screen in the festival. Though short they hinted at the pure potential these high school students have and their passion comes through loud and clear. “The whole message of the Archer Film Festival is we need to amplify the voice of female filmmakers because it is such a male dominated industry. We took a very girl power approach this year,” explains Billie Wakeham, a junior at the school and executive member of the film festival board.

The level of support the school has received should catch the attention of those in the entertainment industry. Actors like Ed O’Neill and Joshua Malina have come out to show they standby the festival’s message as well as industry movers and shakers like Rena Ronson and Tiffany Smith. In just a few short years the festival is already making waves.

The Archer Film Festival is proof that not just women but children should never be underestimated. When given the right resources they can accomplish anything.