JACK JOHNSON AT THE GREEK THEATRE

It’s been a dream of mine to see Jack Johnson in concert. I’ve wanted to for over a decade and this week my dream came true. I attended a Sold Out show at the LA Greek Theater.

One of the coolest things Jack Johnson has done on his From Here to Now to You Tour is bring along many non-prophet organizations to educate his fans about everything from teaching kids how to eat healthy in school to cleaning up our oceans and more. There were even healthier food and drink stalls opened just for his tour It’s certainly the first time I’ve had the option to purchase organic cheese and grapes as an alternative to nacho and cheese. Thank you Jack.

The first night Matt Costa opened for Jack Johnson. He came out rocking on the keys for a few songs and then switched to guitar while the crowd sung a long and got warmed up for the main act.

By the time intermission rolled around everyone was finding their seats, the pit was packed to the brim, and the cheering started as the lighting was being tested faking a lot of people out into thinking Jack was already on stage.

A few moments later a super mellow, heart warming Jack Johnson graced the stage with his kind smile, thanking everything for coming out. Someone in the audience asked if he went surfing today. He laughed and told everyone he surfed Malibu for 4 hours that morning. Now I get why there were sandals for sale at Merch. I love it!

Jack started the show with the song “Taylor” and then followed it up with “If I Had Eyes.” That song has such a beautiful beginning. “If I had eyes in the back of my head I would have told you that you looked good as I walked away.” His love songs are amazingly well crafted. 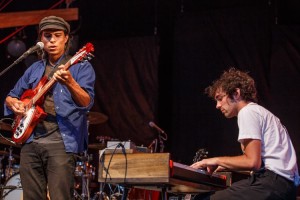 In between songs Jack told some funny stories about how he got his first band name in high school. He said that they just opened the dictionary, closed their eyes and picked words to string together. He played a song dedicated to his old band Stony Dog Fish and then quickly transitioned into an awesome cover of “The Joker” by the Steve Miller Band.Jack had a lot of friends grace the stage with him that night. Matt Costa came out about half way through his set to sing the song “Sunshine” together. After that Afie Jurvanen from the band Bahamas come out and jammed on “Breakdown” Jack switched from guitar to Ukulele and Afie held down the guitar lines.

My favorite song he played was Banana Pancakes. That song is such a beach classic for me. I used to play it on repeat all the way to the beach every weekend for months. When I’ve found myself traveling beaches all across the world the main common theme is Jack Johnson being played on the speakers, it doesn’t matter what country his mellow beach vibes transcend all languages and people. 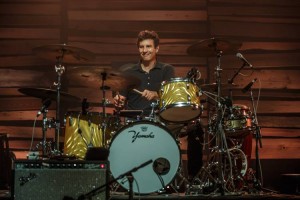 It was a beautiful night, lots of old songs, some new ones, and awesome guess stars. It was a dream come to to finally see Jack Johnson live and I’m so happy to have done so at such a beautiful venue like the Greek Theater.