The stars have been aligning for actor James DuMont. We recently saw him in the Oscar winning film Dallas Buyer’s Club and in the Emmy and Golden Globe winning series American Horror Story. In a new interview, Dumont, who has also starred on the hit shows House and Treme, discussed the powerful experience of playing Jared Leto’s father. We talked about why he believes the Dallas Buyer’s Club, the movie that almost didn’t make it, ended up taking home three Academy Awards!

PPLA: What did you most enjoy about working on American Horror Story?

JD: I think what’s always amazing about American Horror Story is you never know whether you are a character or whether you will return in some form or another. (Laughs) There’s always that open possibility that I really like. I’m hoping that I will come back in the next season. But I may not come back as a doctor, I may be something else. That’s fun in that regard. As an actor it’s awesome! It’s definitely very different from any other TV show you can be on-where you can’t really come back as a different character.

PPLA: It must have been great working with Denis O’Hare on both American Horror Story and Dallas Buyers Club.

JD: You’re absolutely right. Denis O’Hare and I had become friends previous to Dallas Buyers Club , but we were both on American Horror Story and that movie at the same time so we ended up on the same flights and we talked about how it’s a really great gig; this season you’re this and next season you’re something else. They’ve done an amazing job of keeping the interest and the storyline; keep people scared.

PPLA: It’s great! If you had your choice, what would you like to come back as?

JD: Something a little more tied in. I always like to be more part of the story. When you’re a guest star on a show, you’re either the A or B story. For next season, hopefully something that is juicy and fun. Hopefully they will bring me back in a capacity where I can play the wild things that Denis gets to play.

PPLA: I want to talk to you about Dallas Buyers Club, we just saw it get a few Oscars! Congratulations!

JD: Yes, we ended up getting three out of six, which are pretty good odds! We did pretty well!

PPLA: What do you think it is about this film that ended up connecting so much with audiences and critics?

PPLA: I always think there is something about timing. I think we have come so far, particularly the younger generations; they have kind of done an amazing job being a little bit more compassionate and understanding. Some people are inherently gay. I know some people may not agree with that but that’s what I believe. But I think there’s something about this story that we were ready to hear it. We were ready to accept it.

But there’s also something in the way in which it was shot. In terms of there was no lighting, it was done in kind of a documentary style. I think we get pulled in more because it’s not so clean or polished; it looks kind of like a documentary. We look like we are watching something that is very real.

We are in that time period where we are realizing how much of a hold corporations have in our day to day lives. It’s like you’re fighting for your life against corporate interest. I think that if this story was written 20 years ago, it might have done so well. There is something about this time period where people were ready to hear it and accept it. What’s hilarious for me is I was cast and I was told, “You’re going to work sometime in the week. We don’t know when. We don’t know when the money is going to be there.” Like I knew I was cast in this movie where it was like I may work on it I may not. (Laughs) And for it to have that kind of a beginning and then it gets six Oscar nominations and three wins, that’s a testament to many, many things. It’s good solid, story that has universal appeal. A lot of people have said they were reluctant to go see the movie and they were surprised at how funny it was, and how much heart it had. I get a lot of amazing e-mails and tweets and messages from people in regards to my scene with Jared. There are people who have not spoken to their parents since they came out and that they’re hoping that when the DVD comes out they’ll be able to send it to them and hope for some sort of conversation can begin.

So sometimes an actor can think he is just doing one day’s work, but I try to put everything into it not thinking that anybody is watching or paying attention and so it’s amazing to see the kind of impact that this scene particularly had. There are a lot of people who have been abandoned by their parents because of declaring being gay. So the fact that I represent that parent, positive or negative, I think it’s pretty impactful. It changes things for me.

PPLA: It’s such a prevalent topic like you said and that scene with you and Jared, especially. I am sure many will watch it and say, that’s me and my dad.

JD: That’s right. Or say I’ve been through that. I know in the beginning people’s reactions were my god he’s such an ass. But at the end of the day, he does bring a bundle of cash to Ron, Matthew’s character, so he did go there with the intent of getting money and he did come away with it. The writing is impeccable. Melisa [Wallack] and Craig [Borten] wrote an incredible script where within three lines of dialogue you know the full nature of the relationship.

Jared was in the office looking at photographs of Julia, my wife and my daughter. And he says, “I don’t make the cut.” And I say, “You’re right because you’re not part of my family. You made that choice yourself.” And he was like, “It’s not a choice dad.” And so within that short scene you get the full extent of what this relationship is about. This person was abandoned and the father moved on to another family which he can take pride in. It’s a pretty powerful little scene. But the responses that I have gotten from so many different people have been quite remarkable. I’m very proud!

PPLA: With all the various film and television roles you have had, is there a character you haven’t played yet that you would love to portray?

JD: When I did The Butler I got really excited about a historical character. There is something to be said for using the back-story of history and things that you may or may not have known about people. I’m always interested in a character that has a hero’s journey, yet they’re a flawed hero. Much like Matthew’s journey in Dallas Buyers Club here is someone who is homophobic but ends up keeping many homosexuals alive at a very awful time in the world. So for me I would gravitate towards perhaps a historical character.

But there is something about a smart hero. I think in each of the characters that I do, I try to bring humor to situations and I try to find comic moments in drama as well; or if there is a weakness. In Dallas Buyers Club, in particular, when Jared’s voice goes a little bit higher when he goes “I’m sorry dad,” I mean wow! That really resonates with me. As an actor I’m always looking for characters that have those opportunities to either affect people in a certain way or for me to be affected.

One of the ways that we set up with Dallas Buyers Club was that at a certain point Jared and I were two make-up mirrors away from each other and he was listening to music. He was coming out of make up and coming out of dress and wearing a suit and a tie. And naturally I introduce myself as an actor to the other person before we work, but as I sat there and looked at him and he looked at me very quickly, because of the nature of our relationship I decided to not talk to him at all. This was a strange father and son relationship and because of that I didn’t want to interrupt his process. 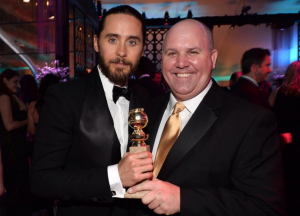 I was setting up my process as well, which is let it be. The only time that we speak to each other is through the characters. It was something I had never done before but there is something about the nature in the way in which it was written and the circumstances in which we were re-meeting each other. And what’s great is I didn’t know this person at all. So I kept it that way. And we stayed in character all the way through. I just felt we were respecting each other’s process. Because Matthew had set that tone of how committed everyone should be. So I never spoke to Jared until about twenty takes after we were done. The director would keep giving directions, we improved it a million different ways, I was in tears. He was in tears. I held back; he held back. Then about 20 takes in we were done I finally turned to him and said, “Who are you?” And he said, “Who are you?” (Laughs) And then we were done and it wasn’t until a year later he was in town doing 30 Seconds of Mars at The Hollywood Bowl, I got invited to go and then we hung out after and just talked to each other about the magic of that scene!