Maladies is a strange film, let’s get that out of the way. Told in a very abstract and non-linear fashion there isn’t a complete story being told but rather glimpses of lives at a certain point in time. It is undeniably artistic but hides a deeper meaning once you get past its creative devices.

At first glance the film seems to be going for a high-art almost meta approach by naming its characters by their actual first names (James Franco plays James, Catherine Keener plays Catherine) but it is simple misdirection on the part of the director, known only as Carter. The truth of the matter is the audience is watching a group of people all of whom are dealing with some form of mental illness or prejudice in either the late 1950s or early 1960s. Once that plot point is realized the movie blossoms into something beautiful.

Franco gives an amazing performance as a former actor who retired from the industry, most likely due to his mental illness. He lives with his best friend Catherine, an artist who occasionally dresses up like a man, much to the confusion of James. They share the house with Patricia (Fallon Goodson) who also suffers from a form of mental illness although it is never said what kind. Added into this already eclectic mix is Delmar (David Strathaim), their elderly next store neighbor with gender issues of his own. The script’s unconventional structure gives everyone a chance to shine, albeit in very subtle ways.

Although Franco steals the show as the main character it is Strathaim that ends up leaving a powerful impression. His character clearly has a crush on Franco but given the confines of the era he is unable to move on it leaving him isolated and tortured. Though he’s only a supporting character he gives a truly fantastic performance. 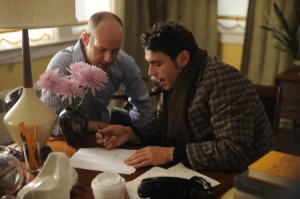 Franco’s on the other hand is much more layered and complex. A big factor in that is the fact that he spends the course of the movie talking to not only the other characters but his own inner monologue and the narrator. At certain points in the film there are three layers of dialogue going on between Franco and the film itself. It makes for a sometimes complicated narrative but one that ultimately makes sense in the grand scheme of things.

Considering this is Carter’s first feature length film he should be commended for taking on such high-concept material. Few directors could have pulled off Maladies with such ease and respect for each of its characters. Hopefully this movie gets the attention of the industry, it is well deserved.

Maladies opens in select theaters on March 21 and will be available on-demand March 25,2014. Watch the trailer here.