Easy breezy singer-songwriter, Jason Mraz played to a nearly sold-out crowd at the historic Pantages Theater in Hollywood on Thursday night, kicking off the crooner’s impressive three-day run at the theater renowned for putting on West Coast productions of Broadway musicals. 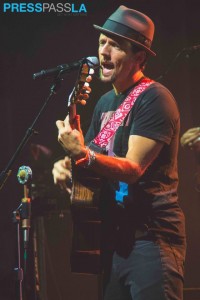 Members of the LA-based, all female folk-rock band, Raining Jane collaborated with Mraz on his latest album, entitled Yes! and shared the stage with him for the entire show. Before belting out their own uplifting tune, “Opposite of Blue”, the quartet reminisced about their experiences at the theater growing up. One of the ladies revealed that she had seen The Lion King with her parents there years ago.

As the group exchanged puns and memorable lines from the musical, they also expressed their gratitude that they were able to perform at this L.A. landmark. Under Pantages’ lavishly carved, gold-plated Art Deco ceiling, the troubadour and his songstresses played a three-hour set of favorites old and new. Like a trip to church, the evening proved to be truly moving and spiritually purifying.

A young Jason Mraz burst onto the San Diego coffeehouse music scene twelve years ago with his debut single “The Remedy (I Won’t Worry)”. Back then, the Mechanicsville, Virginia native was known for his delightful wordplay and since then, the wordsmith has lept towards a more soulful songwriting approach with each consecutive effort. His melodies ooze love, gratitude and wisdom, a refreshing a change of pace from all the pop stars singing “Baby, Baby, Baby” on the radio these days.

Mraz has become the poster boy for a completely different kind of lifestyle. He’s a vegan who loves surfing and yoga. He spends most of his time at his avocado farm up in the hills outside San Diego and he sells most of his organic harvest to Chipotle. Mraz is also a huge proponent of charitable giving. He started his own foundation in 2011 that gives to organizations such as VH1’s Save the Music program and the NRDC.

The feeling of giving and kindness was palpable on Thursday night as he performed his songs, all imbued with a certain spiritual awareness “I guess that one is about the interconnectedness of all things” Mraz explains as he finishes playing an up-beat tune entitled “I’m Everywhere” off his latest album. Less of a stalker’s manifesto and more of a metaphysical realization, he opened the show with the empowering notion that our identity is not limited to what our bodies contain.

He then strode right into his joyful little number, “Back to the Earth” about the importance of getting grounded and reconnected with Mother Nature. But life is not all organic roses for this bard. Mraz used this album to take on the misconception that he is Mr. Positivity at all times. He also performed the new track, 3 Things, where Mraz admits to difficult times and gives his recipe for dealing with dark days. Like an Eat, Pray, Love-style to-do list, here Dr. Mraz prescribes purging your sadness through tears. The feel good hits kept coming as he then introduced a surprise guest to the stage, none other than Brave singer and fellow UCLA grad, Sara Bareilles for a duet. The duo sang Beautiful, the inspirational 1970s standard from Carole King’s musical of the same name. Mraz revealed that he thought the song choice being a Broadway selection was quite apropos for the venue.

Mraz knows his crowd well and what they want to hear. And on Thursday night, love was in the air. The audience was chocker block full of couples, from young lovers on a first date to retirees. So for them, he sampled his new soft and breathy ballads entitled “Love Someone” and “Long Drive” and the catchy “You Can Rely on Me”. Also included in the set was an old favorite, “Lucky” the sunny love song of choice for summer 2008.

The balladeer then capped off the evening with his most well-known hit, “I’m Yours”, the video for which, was shot in Kauai and has clocked in at a mind-boggling 185 million hits on YouTube. This time, the singer-songwriter added a soft and sweet ukulele rendition of “Somewhere Over The Rainbow” woven into the song’s introduction. This choice was quintessentially Mraz, complete with his signature scatting and Hawaiian-esque breeziness. He had the whole crowd up on their feet, swaying and singing along at the top of their lungs. 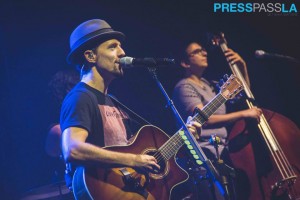 Thursday night’s show reminded me why I fell in love with the Grammy award-winner’s music all those years ago when he was just a “curbside prophet waiting for his rocket to come.” Well, that rocket certainly arrived for the artist and now one can tell that this is an older, wiser and deeper Mraz. Yes! is undoubtedly a much quieter album than his previous efforts. It is actually his first completely acoustic record. This time around, it is all about gratitude. It radiates through every chord he plays. All in all, Mraz’s words soothed the soul and the crowd that night was eternally grateful.