Press Pass LA caught up with Jennifer Lopez and Ray Liotta about their new hit show “Shades of Blue” which premiered January 7th. We had to find out what convinced these two film stars to take on TV.

The shows marks a return to scripted drama for Jennifer Lopez whose last TV series was the short-lived ’90s crime show Second Chances. 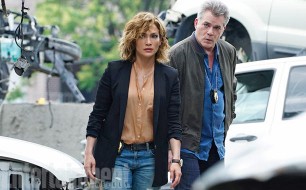 Lopez plays Harlee Santos, an NYPD detective and single mother struggling with financial problems. When she is caught up in an FBI anti-corruption probe, she must choose between doing the right thing for her daughter or covering up for her corrupt police co-workers.

Fun Fact: NBC asked her to consider the lead role in the project that she had originally pitched as a producer more than two years earlier with longtime collaborator Elaine Goldsmith-Thomas.

We don’t know how Lopez balances Shades of Blue, the final season of American Idol, and her Vegas show which opens TONIGHT, but she sure looks good doing it!