ADVANCED REVIEW: JIMI ALL IS BY MY SIDE

Jimi: All Is by My Side, the Jimi Hendrix biopic from writer/director John Ridley, is a portrait of the virtuoso guitarist’s pre-fame days in New York and London.

Plucked from toiling away in obscurity in empty clubs by Linda Keith (Imogen Poots), a Rolling Stones groupie socialite who becomes Jimi’s manager/girlfriend, Hendrix is masterfully played with a galactic cosmic hippie cool by OutKast rapper Andre 3000. The titular character initially comes across as a prodigy whose immense talent is wasted by a guy who doesn’t know what he wants, or if he even wants anything at all.

This film avoids the typical clichés that plague biopics, such as witnessing a death early on in life that might have been the main character’s fault, an abusive family member, or a crippling medical condition. However, while Johnny Cash and Ray Charles were presented as the de jure causes of their siblings’ respective passing, the audience was also shown how those tragic events ended up both driving and haunting the protagonists throughout their careers.

In Jimi’s case, however, there is very little mention of his childhood though we do learn that his mother was virtually non-existent and that he and his dad don’t speak. In one scene, Jimi calls his dad to tell him he’s in London, and while the elder Hendrix (whose real last name is James) seemed to be out of it, he was at least coherent enough to ponder how Jimi could be successful as a musician if he still has to call him collect. These moments of dry humor helped to add some levity and also give the audience a break from the he film’s occasional reliance on ear-piercing guitar solos as a narrative device.

The performances are good throughout. Andre 3000’s music, real-life persona, and mannerisms are a modern-day reincarnation of Hendrix’s, so while he should get credit for his performance, I wonder how much of it was him playing himself while simply wearing the guitarist’s clothing. Poots succeeds as playing Linda Keith to be not so much as Keith Richards’ girlfriend, but rather a business-minded party girl who knows England’s rock star elite, happens to be dating a Rolling Stone, and enjoys being a connector among those with music industry dreams. The back story of her defying her father was unnecessary, but thankfully it also wasn’t given much screen time.

Ridley’s script moves at a quick pace and does a fantastic job of capturing the English rock and cultural scenes in the mid-60s. The audience is deftly put right in the middle of the action, as if we’d waited all night for the post-Cream Eric Clapton club performance that Jimi and his manager attend. When Hendrix ends up meeting his hero during an intermission, he asks if they could jam on stage. Clapton reluctantly agrees. Jimi plays so ferociously that after a few notes, Clapton walks off. Hendrix’s manager follows to apologize for showing him up at his own gig, and Clapton says: “Is he really that good?”

We all know the answer is yes. But supposedly, the Hendrix estate wouldn’t grant the music rights, so the only music played are Jimi’s covers of rock songs and instrumental blues jams. The inability to sing along took away from some of the enjoyment, but it also smartly puts the focus on how Jimi begins to see the world and interpret his reactions through his music. In turn, the audience sees a guitarist gradually evolve from anonymous club virtuoso to burgeoning rock star. 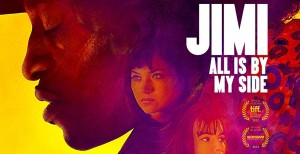 Ultimately, this film works, but it’s not for everyone. Without his most famous songs in the script, it likely won’t convert new fans. But fans of the time period and of rock history will enjoy seeing the film’s visual name-dropping. Jimi: All Is by My Side is a well done biopic that shows how a variety of outside influences – ranging from Jimi’s girlfriend all the way to a West Indies immigrant/Black Power disciple/marijuana connoisseur – shaped his growth. What we don’t see, however, is the defining moment of when his spiritual haze became a purple haze.

Jimi: All Is by My Side opens September 26th. Watch the trailer.