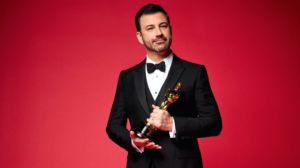 As the Oscars hit the big 9-0 next winter, Hollywood’s most elite stars will come out to celebrate the momentous occasion with a surprise not-so-new host pulling the reins: Jimmy Kimmel.

“Hosting the Oscars was a highlight of my career and I am grateful to Cheryl [Boone Isaacs], Dawn [Hudson] and the Academy for asking me to return to work with two of my favorite people, Mike De Luca and Jennifer Todd,” Kimmel said. “If you think we screwed up the ending this year, wait until you see what we have planned for the 90th anniversary show!”

Kimmel, who hosted the 89th Academy Awards earlier this year, has been confirmed by both the Academy and ABC as the host for next year’s show. Although he initially promised that he’d “never come back” to host, we’re glad to see he’s had a change of heart.

Nonetheless, the Academy and ABC couldn’t be more thrilled to have him back.

“We can’t imagine anyone else hosting The Oscars. Jimmy’s skillful command of the stage is invaluable on a night when anything can happen – and does,” said Channing Dungey, president of ABC Entertainment. “With Mike and Jennifer at the helm, we’re ready for another unforgettable show that will dazzle, delight and, most importantly, honor 90 years of Hollywood’s most prestigious award.”

No one can throw a party 90 years in the making like @JimmyKimmel and producers Michael De Luca & Jennifer Todd! Welcome back! #Oscars90 pic.twitter.com/uIlZZ8cWtN

Considering the “Moonlight”/”La La Land” mixup made for a disastrous finale at last year’s show, it’s surprising to see the Academy return to Kimmel so quickly.
From the moment he hit the stage, the late night host proved that he was destined to have the gig. Since it’s not his fault that the Academy made such a hefty mistake, there’s no harm in having him host again. Likewise, we can only hope Kimmel brings his witty and timely humor to the table at next year’s show.
Mike De Luca and Jennifer Todd, the producer’s of the 2017 Oscars, will also return to work alongside Kimmel for the 2018 edition.
“Jimmy brought back the essence and light touch of the greatest hosts of Oscars past,” said Dawn Hudson, Academy CEO. “Mike and Jennifer’s love of movies is infectious and touched every aspect of the show. This is the perfect team to lead us into the ninth decade.”
The 90th annual Academy Awards is set for a live televised arrival on Sunday March 4, 2018 on ABC.