Somehow juggling  full-time careers in acting and singing as well as a strong presence in the world of  charity work Barrowman does more in a year than most will do in a lifetime.

Though his star is currently on the rise in America as Arrow’s Malcolm Merlyn, he already has a solid cult following overseas for his iconic role as Captain Jack Harkness in both Doctor Who and Torchwood. It doesn’t stop there, he also has an extensive music career and just released a new album called You Raise Me Up which is topping the charts. He already has plans to tour with the album next year.

Press Pass LA had the chance to sit down with Barrowman to discuss his role on Arrow, how he keeps his life in order and his love of the fans.

PPLA: Was it always the plan to bring you back in season 3 of Arrow or were you surprised when you got the call?

JB: It was always in the plan when they created the show. When I came on they told me that Malcolm Merlyn would be one of those characters that would stay in the shadows. They briefly brought me back for season 2 and then talked to me about being a regular about halfway through that season.

I said absolutely but I had some other things planned at the time I would need to cancel in order to do it. I wanted to make sure I could devote all my time to Arrow.

PPLA: Malcolm Merlyn is a very dark character but his intentions seem to be in the right place, not unlike Captain Jack in Torchwood. Do you find that you draw on your Torchwood experience at all in playing Merlyn?

JB: It’s interesting you say that. To me they are two very different people. Jack had to make some tough decisions but he never flat out killed anyone to accomplish his goals. Malcolm will do whatever he has to do to finish his objective. Malcolm is, I think, in my eyes anyways, a very misunderstood hero. If you look in Arrow both he and Oliver are trying to do the same things. It will be interesting to see how all that plays out in season three.

PPLA: You’re a singer as well, how do you find the time to write and record albums between acting?

JB: I have a group of people around me that meticulously plan my meetings out. I get in and I do what I need to do and I get it done. If I do something I make sure I give all my time to do it.

PPLA: You’re prepping for the You Raise Me Up tour next year, how is that going?

JB: At the moment I’m focusing entirely on Arrow. I do have ideas of things I want to do and different stories I want to tell while on the tour but for now it is all about Arrow until we finish shooting.

PPLA: You’ve always been very active supporting charities, is there one you’re working on now you’d like to discuss and give a shout out to?

JB: I’m very proud of all the work I do with the charities I have been involved in over the years. I work with charities that deal with the LGBT community, the Terrence Higgins Trust and a lot of cancer organizations. I’m actually being honored by the Queen soon with a Most Excellent Order of the British Empire for my work. 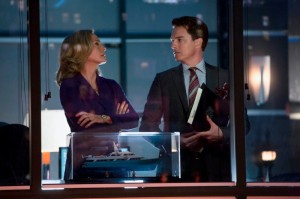 PPLA: That isn’t surprising at all. Between Doctor Who, Torchwood and Arrow you have become very iconic.

JB: Thank you for that. Really, I want you to know that it is the fans that have changed my life.

Those in the Chicago area can meet Barrowman at Wizard World August 21-24 at the Rosemont Convention Center.