I first saw John Legend live earlier this year at the Emerson Theatre in an intimate concert presented by Citi Card. After hearing this talented piano man play to room of less than 200 guests only a few feet away, I didn’t think any show could top it. But then, I was at the Greek Theatre Monday night. 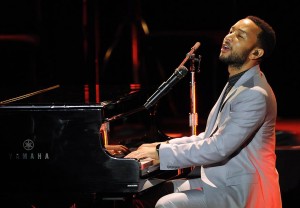 As far as venues go, The Greek Theatre is by no means small but it has a way of feeling that way. It is nestled in the trees of Griffith Park and feels magically away from the city that lies just below. Add to that a performer like Legend, who feels instantly vintage with his pressed suits and soulful voice. And just in case you were wondering, he sounds just as good live. Correction, he sounds better.

His “All of Me” tour marks ten years for Legend as a signed music artist and he brought the audience back to the beginning recounting the late 90s and his struggle to finally get a record deal in 2004, all the way to present day. John Legend seamlessly combines soul, hip-hop, and electronic influences and its no wonder he already holds nine Grammy’s.

After opening act Mapei- a female indie, rap, and pop artist- who did a good job getting the crowd in  the mood with her hit single “Don’t Wait,” Legend opened the evening with  crowd-pleaser “Made to Love.” He then coyly teased the crowd that, “Los Angeles, tonight I’ll be the best you ever had” and fittingly went into “Tonight (Best You Ever Had).”

Perhaps my favorite thing about seeing Legend live is witnessing his ability as a storyteller, both in lyrics and in stage presence. His charisma instantly makes you forget that he is a successful A-list artist by recounting his early days in New York playing in a bar with five audience members, “three of which worked at the bar.” He talked about all the times he thought he would get a record contract but didn’t, and you can’t help but feel like you are taking the journey with him, rooting for the underdog the entire way.

He played a montage of a few songs he lent his vocals and piano to during his early years, including Alicia Keys’ 2003 hit “You Don’t Know My Name” as well as songs with  Kanye West (who first gave him a break) Jay-Z, and Lauryn Hill. His record deal did indeed come in 2004 and he went on tour with both Kanye and Usher (Confessions Tour) that year. 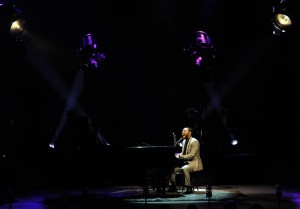 The set list for the rest of the evening included some of Legend’s biggest hits such as “Let’s Get Lifted,” “Used to Love U,” “Save the Night” and “Maxine.” After singing “Maxine,” he revealed it was one of his grandmother’s favorite songs because Maxine was her middle name. He quipped, “I guess she didn’t listen closely to the lyrics,” as the story recounts a man seeing his beloved Maxine out with another lover. Legend’s love of his family continued throughout the night and he honored his other, late grandmother with a rendition of “Bridge Over Troubled Water” and shared with the audience that she had first taught him gospel music in his youth. His biggest regret, he noted, was that she did not live to see “all this.”

And “all this” was something she would certainly be proud of. The tour has been sold out in every city and Los Angeles was no exception. In case you are wondering how Legend does it, he was sure to even share his writing secrets with the fans. He took us through a step by step process for “Again” starting with writing the music, adding in some gibberish to create the melody until he decides “what he wants to say,” and finally adding in the appropriate lyrics.

The show also included favorites “Save Room,” “Good Morning,” “Caught Up,” Ordinary People,” and a cover of Michael Jackson’s “Rock With You.” Legend joked to the men in the audience that he had done all he could to get them in a good place for after the show. Ladies, I guess all we need is love and Legend to set the mood!

And perhaps he did just that because the most touching moment of the evening came shortly after when a man in the crowd, just a few aisles away from me, proposed to his girlfriend during Legend’s “You and I.” Hint: she said yes!

Legend closed out the show with his encore of “So High” and his biggest hit to date “All of Me” which he notoriously wrote for his wife Chrissy Teigen. 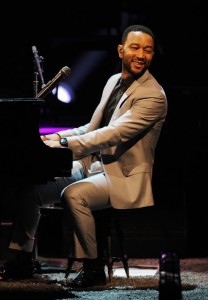 At the beginning of the show, Legend promised L.A. he’d be the best we ever had and he delivered. In fact he over delivered by playing an encore performance at the Hollywood Bowl on Wednesday night. He paid tribute to the great Marvin Gaye with a full rendition of “What’s Going On,” a song that still applies to the current day issues in America and with a clear nod to the recent tragedy in Ferguson, Missouri.

I don’t think a crowd could have approved more.  As far as concerts go, this week was clearly Legend-ary.