Beautiful red roses and white votive candles align a staircase that leads to a romantic venue which is the setting for a once in a lifetime experience, a private show by John Legend.  This was the experience that Citi gave its Citi Thank You Card members exclusive access to with the purchase of these highly coveted tickets through its Rewards Program hosted by the Emerson Theatre in Hollywood, CA on April 21, 2014.

Nine-time Grammy award winning singer and songwriter John Legend gave an intimate concert to his fans with proceeds going to Teach For America. Viewers of the 2014 Billboard Music Awards will get an exclusive behind the scenes look and coverage of the concert, but trust me the live experience is something I will never forget.

Everyone from the bartenders to security were courteous and there was something magical in the air.  There wasn’t a bad seat in the house. Centered in the venue was a black grand piano that Mr. Legend, who seemed as if he were floating and not walking like us mere mortals, sat and smiled before taking the audience on a journey through his music. In between songs, he treated the crowd to stories of his childhood,  his beginnings in the industry, and the personal messages behind his songs.

He recounted the early days of his career, starting out playing at The Living Room in NYC at the 5:30PM time slot to just a few audience members, most of whom worked in the building. Believe it or not, when Legend first tried to break into Hollywood he was rejected by every major record label, including Sony, where he now calls home. Even Clive Davis once told him he needed to work on his songs! 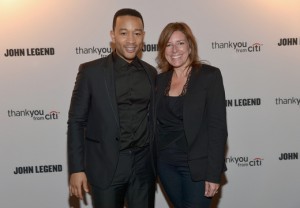 Legend got personal with the audience discussing his the love he has for his late grandmother, whom he credits with teaching him piano, before belting out a heartfelt rendition of “Bridge Over Troubled Waters.” I felt like I was at home in church in North Carolina and oh Lord, I could have used a tissue!  It was just John Legend and a piano and that’s all that was needed. The radio does not do his voice justice.

He took requests, played a few crowd favorites, and ended the evening with his current chart topping hit “All Of Me” which will probably be heard at every wedding in the year 2014! His own wife, Chrissy Teigen, just a few feet away watching with her closest friends.

Thanks to Citi Group, once Mr. Legend walked through smiling and thanking all his fans, we all turned to one another and simultaneously gave our neighbors a pinch on the arm to make sure this wasn’t a dream. 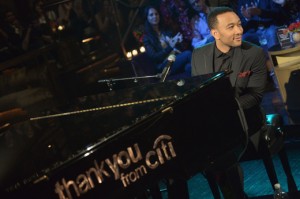 Attendees left with a complimentary vinyl of Legend’s latest music!