Press Pass LA could not be more excited to return to the world of Alice in Disney’s “Alice Through the Looking Glass,” an all-new spectacular adventure featuring the unforgettable characters from Lewis Carroll’s beloved stories and a stellar cast including Disney favorite Johnny Depp! 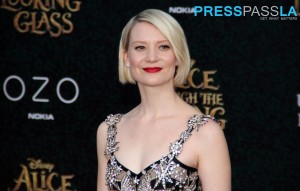 In this sequel, Alice returns to the whimsical world of Underland to save her friend the Mad Hatter (Johnny Depp). The film is directed by James Bobin, who brings a unique vision to the spectacular world Tim Burton created on screen in “Alice in Wonderland.”

The film is written by Linda Woolverton and produced by Joe Roth, Suzanne Todd and Jennifer Todd and Tim Burton, with John G. Scotti serving as executive producer.

Disney pulled out all the stops transforming Hollywood Boulevard into a Underland and the cast had fans lined up along the star walk hoping to catch a glimpse!

We were lucky enough to attend the screening of the movie in 3D and it is possibly the best Disney film in years! Mia and Johnny’s friendship will steal your heart. Speaking of hearts, Helena Bonham Carter returns in all her glory as the Red Queen and we get a glimpse into the rivalry she has with her sister The White Queen played by Anne Hathaway. Sacha Baron Cohen debuts as Time and practically steals the show. We didn’t even notice the nearly two hour run time; we could of stayed in their world forever. 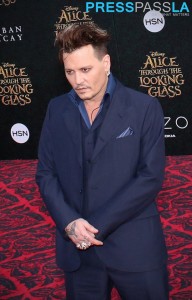 As the Mad Hatter says, who’s to say which is real, reality or the dream?

Check out our photo gallery of Johnny Depp and more! Alice Through The Looking Glass is in theaters nationwide May 27th.