JOICO WANTS YOU TO HAIR SHAKE WITH DWTS’ PETA MURGATROYD

Last weekend,  Joico hosted an event for their new hair product, at The District in Beverly Grove.What is this fabulous new product that deserves it’s own party? 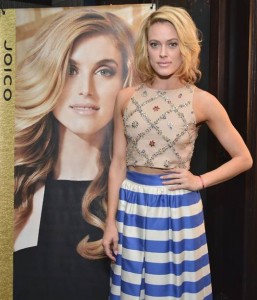 Well it’s a revolutionary texturizing spray called “Hair Shake” that goes from liquid to powder as soon as it touches your luscious locks.  The product is called hair shake because you actually have to shake the bottle prior to using it, which is uncommon among hair products.

With such a fun name I HAD to come a fun party.  Upon walking into The District (which is absolutely beautiful by the way) I was greeted by just about every Pivotal and Joico employee.  Talk about lovely hostesses.  I was immediately walked over to the bar to enjoy the signature cocktail called The Shaketini. It was all things watermelon and delicious.

There was a demonstration station set up so that guests could try Hair Shake for themselves, with the help of celebrity hairstylist Paul Norton. I was very impressed with the product. It didn’t leave my hair sticky or weigh it down at all. But instead I was left with that “I just woke up but my hair somehow looks flawless” look, which I have been trying to achieve for years. 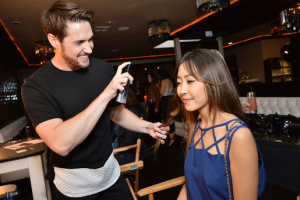 We all gathered in the main room where Joico VP, Sarah Jones, gave a few words, and the celebrity guest, Peta Murgatroyd did her own Hair Shake dance. I’m a huge Dancing with the Stars fan, which makes me a fan of Peta’s, and her dance was so lively and fun.

The party really played on the whole “shake” theme and I loved every minute of it.