I hate to say it PPLA fans, but last night marked the date of Jon Stewart’s last episode on The Daily Show.

Thursday night, the popular Comedy Central program featured an extended episode for the shows farewell. The comical host brought back old favorites—John Oliver, Larry Wilmore, and Stephen Colbert—to help him celebrate. As an added bonus, Bruce Springsteen performed as everyone in the studio danced. After Stewart’s 16-year run with The Daily Show, going out with a bang was the only way to give him a proper send off. 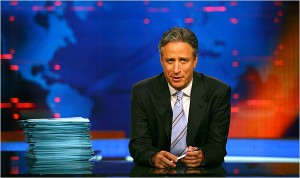 Before making his daily goodbye, Stewart made sure to comment on the GOP candidates debate. Although the debate didn’t occur until after the show’s taping, The Daily Show did a mock-cover of the event. But of course, the fake-reporting was in a typical Stewart fashion.

Finally, Stewart closed by saying, “Nothing ends. It’s a pause in the conversation.” We definitely hope that that’s the case!

Did you get a chance to catch last episode on The Daily Show? Regardless, Jon Stewart had a great run and we can’t wait to see what he has in store!