This week Press Pass LA had the pleasure of speaking with actor Josh Kelly, whose bare bod is now on billboards all over Los Angeles.

Why you ask? Well, it is of course to promote his new show UnReal on Lifetime, premiering on Monday June 1st at 10pmET, get your mind out of the gutters! When I asked Josh about how he felt about his hot bod being plastered all over Hollywood, he humbly responded “Its funny ya know, I’m glad it worked out, I’m glad I lost some weight before they took those photos. It’s neat, one of them is at the bottom of my girlfriends street, it is literally unreal.” In the background his girlfriend added, I sit outside and have lunch and get to look at him!”

Kelly is not only a longtime TV vet that appeared on shows like One Life To Live, Ben and Kate, Army Wives, True Blood, Dollhouse, and more, but he actually served four tours in Iraq and Afghanistan as an Army Ranger, and then moved out to Los Angeles to pursue his dreams of being an actor.

UnReal is Kelly’s latest TV credit, and I can already tell it is going to be a massive hit for both him and Lifetime.  The series follows a young producer Rachel Goldberg (played by Shiri Appleby) who works on a hit dating competition show called Everlasting in which her sole job is to manipulate contestants to get over the top footage.  Kelly plays Jeremy, who is a cameraman on the set of the show, and also Rachel’s ex.  To complicate things even more, Jeremy is now engaged to the on-set makeup artist Lizzie (played by Siobhan Williams), when Rachel returns for a new season of Everlasting after she had some sort of breakdown the season before. 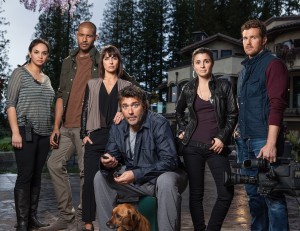 Kelly and the cast of Unreal.

Kelly gave me an inside look into the world of the show and, let me tell you, I can’t wait.  After shooting in Georgia about a year ago, and going through script changes, recasts, and more, the ten episode season is going to blow audiences away.  When asked  about the correlation between Everlasting and The Bachelor, he was quick to state that the two obviously have similarities. Yeah, okay Josh, whatever you say! Possibly for legal reasons, none of the actors/producers/writers can say it is directly based off the ABC hit, but come on, it seems pretty dang close.  However, Kelly did reveal that he consulted a friend who is a cameraman on The Bachelor, like his character Jeremy is on UnReal.

The great thing about the show is that we get to see the actual drama that goes on behind the scenes with not only the contestants, but the crew members and producers.  We have never seen a scripted drama following what really goes on behind the scenes when shooting a reality show, and I have the feeling that UnReal is going to blow it out of the park.  In regards to Kelly’s character Jeremy and what his intentions are, he stated,“He is a good guy, every character on the show is trying to do right by himself. Everyone can form their own opinion, I guess some people might. He loves/loved Rachel. I think he is good guy, but I think any actor playing any character thinks they are good, even if they are not.” 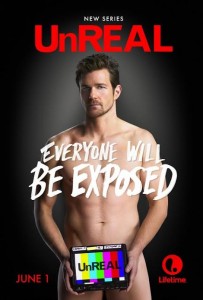 After shooting UnReal, Kelly worked on a project that is close to his heart, the short film Cope. Written and directed with a friend and fellow veteran the film follows two special operations solderiers who return from war only to be the victims of serious PTSD.  Not only is this project actually important to Kelly because of his past as an army ranger, but he is extremely proud of the end product and says it is some of the best work he has ever done.

After speaking with Kelly, I am even more excited than I was before for the premiere of “UnReal” next week. Set your DVRs this Monday June 1st at 10pmET on Lifetime so you don’t miss a minute!”