JUPITER ASCENDING DESCENDS TO WORST OF 2015

It has only been a few months but 2015 is already starting to get filled with a plethora of horrible films. From Mortdecai to Seventh Son the past two months have been a dumping ground for studios to get rid of films they have been shelving for months or years. For a while there it looked like Jupiter Ascending might break that trend but actually sitting down to watch it was a true disappointment.
The film, which is neither a sequel nor readymade franchise, should have been great. Dreamed up by the Wachowskis, the movie tells the story of Jupiter Jones (Mila Kunis), a struggling Chicago maid strugglign to get by in her dead-end job. Jones hates her life as an illegal immigrant and dreams of the stars just like her long dead father. 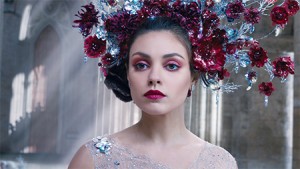 Her whole life changes when beings from the stars come after her, believing her to be the reincarnation of a space royal.  That puts her in the middle of a quarrel between warring factions of the family all of which want her inheritance. Her ambassador to this new universe is Caine Wise (Channing Tatum) a half-man, half-wolf space ranger who introduces Jones to her new role as Queen of the Universe and owner of Earth.

One of the major problems with the film is that there is so much to take in that you could spend almost the entire movie world building and still not get anywhere. Whole chunks of time are spent introducing new characters and worlds which are then quickly forgotten and never spoken of again. The plot itself is so convoluted that it really doesn’t make much sense in the end.

The directors do deserve serious props for creating the original idea, but it just doesn’t work as a movie. As a sprawling space opera it would feel much more at home in a trilogy of novels or on TV where it can be given the room to breathe and explain things properly.  They earn major points for creativity but loose several hundred for execution.

Still, that alone would not make it Razzie worthy. Much of that comes from performances that are either too wooden or too over-the-top. Eddie Redmayne is the biggest offender of the movie. When he doesn’t sound like he’s trying to imitate Marlon Brando in The Godfather he has random fits of rage that come so completely out of nowhere it is impossible not to cringe and/or laugh in the middle of the theater. Meanwhile Tatum seems to have been instructed to do the exact opposite and never really registers a complete emotion throughout the whole film.

The end result is a film that is botched and all over the place with nothing for the audience to latch on to or really care about. The first major action sequence happens so early in the film that, even though it involves the two main leads, neither is developed enough to really care that they are in danger.

Hopefully this steady stream of bad movies will end next week with Kingsman: The Secret Service, Hollywood needs a win.