In case you missed our first edition of “Ask Our Guy,” which made its debut just in time to save your Valentine’s Day plans, we are back! And just because we left you hanging since (like the tease that we are) we’ve decided to answer three of your burning relationship questions all at once.

Picking Up The Check

Q: I know this may sound like a cliché, but I still get opposing opinions on it from my friends, both male and female. So, here goes… Should a man pay on the first date?
– Valerie, North Hollywood

Dating Fate – or Dating Fear?
Q: I’d like to go on more dates, but I don’t seem to be meeting anyone. When I was at a friend’s apartment recently I checked out guys on her internet dating site. I wrote to three guys through her connection, saying that I wasn’t her, but I would be interested in chatting. None of them responded. Another girlfriend says it’s because I’m not signed up on the site so guys can’t see my photo or learn about me. She says I should just sign up and give it a try because guys are going to think I have something against internet dating. I don’t want to sign up, but I’d like a date.
– Rachel, San Diego

A: Your girlfriend is right. Nobody’s going to respond to you unless you step forward and get out there. Would you respond to a guy who wrote to you while hiding behind his buddy’s online profile? No, because that’s dishonest behavior, plain and simple.

You can continue relying on fate (no shame in that). But if you really want a date – and fate isn’t playing ball, you have to ask yourself: Is what I’m doing working? It’s time to step up and try something new to get what you want. Who knows, if you dare to ask – someone’s bound to answer.

Ready to Make the Big Leap?
Q: What are some sure fire signs that a guy is ready to take the big leap into living together or even marriage?
– Vicky, Manhattan Beach

A: If you’re at the stage in a relationship where you’re regularly picking his underwear off the floor, he’s probably already living with you, which is a sure fire sign that you should start asking for rent money. Does your boyfriend regularly fix stuff in the house? That’s a positive indicator he may be ready to discuss marriage. Does he actually remodel it? An even better one. Does he voluntarily attend open houses, take you to housewares stores or consult your calendar before making vacation plans? These are all solid gold signs of nesting behavior in the male species. You may now declare open season on marriage discussions.

If, however, you observe such behavior in your boyfriend, yet he’s still unwilling to discuss marriage, he is either: 1. already well into the buying-you-a-ring/planning-where-he’ll-propose stage. 2. Already married to someone else. 3. Still dealing with his mommy issues.

Are you tired of asking your best girlfriend for our advice? Then Ask Our Guy, right now! Email to [email protected] 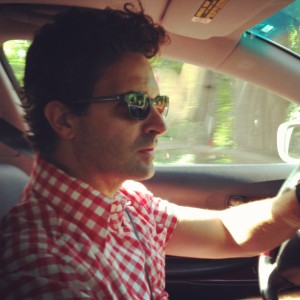 Marcello is a writer of humorous non-fiction books and somewhat serious television programming. When he is not writing he is cooking something. When he is not cooking, he posts absurdities on his blog: The Stupidest Thing I’ve Heard Today. Marcello is based in Los Angeles where very few things, including dating, are taken very seriously at all.