JUSTIFIED AT THE PALEY CENTER

After six critically acclaimed seasons, Justified airs its series finale this Tuesday, April 14.
In anticipation of the finale, The Paley Center for Media presented “An Evening with FX’s Justified” in their Beverly Hills theater.

Present were creator and showrunner Graham Yost, along with stars Timothy Olyphant (Raylan Givens,) Joelle Carter (Ava Crowder) Erica Tazel (Rachel Brooks,), and Jacob Pitts (Tim Gutterson). Fan favorite Walton Goggins (Boyd Crowder) was not present, as he was filming Quentin Tarantino’s next film, Hateful Eight, and Nick Searcy could not attend as he was in Japan with his family. 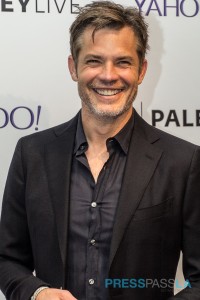 Justified, based on Elmore Leonard’s short story “Fire in the Hole,” is one of the most literate shows out there, and the sixth season has seen it deftly calling back to characters and situations all through its run, tying up some loose ends and reminding us that this is one long, masterfully plotted storyline, as opposed to a series of separate seasons.  Yost referred to this as circular motion, stating that they were bringing it back to where it started.

Pitts summarized the enduring appeal of Justified, by describing it as a show that consistently sets up stereotypical situations and then subverts them.  When asked how he hopes fans will remember the series, Yost said that it is entertaining and risky and funny…it’s Elmore Leonard.

The full event was live-streamed on Yahoo Screen, and is available here: https://screen.yahoo.com/live/event/paleylive-an-evening-with-justified