Apparently, Keifer Sutherland, best known for role as Jack Bauer in 24, can do more than just save the world!  Sutherland, who has already won an Emmy, a Golden Globe, and two Screen Actors Guild Awards, might just be eyeing a Grammy next. His single “Can’t Stay Away” debuted yesterday on Spin.

“Can’t Stay Away” is off Sutherland’s upcoming, debut album Down In A Hole which he self-penned and co-wrote every track on! The 11-track album includes another single “Not Enough Whiskey” and will be the focus of his upcoming 11-date Canadian Tour. 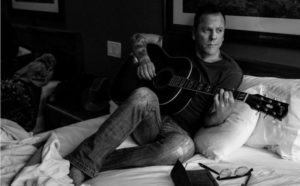 “This record is the closest thing I’ve ever had to a journal or diary. All of these songs are pulled from my own personal experiences. There is something very satisfying about being able to look back on my own life, good times and bad, and express those sentiments in music. As much as I have enjoyed the writing and recording process, I am experiencing great joy now being able to play these songs to a live audience, which was something I hadn’t counted on,” Sutherland said of the 11-track album. A full track listing and release date will be announced soon.

Kiefer Sutherland recently made his Grand Ole Opry debut in Nashville, TN on May 31st, performing two tunes from Down in a Hole for a packed audience: his heartbreaking “Not Enough Whiskey” and the cinematic “Shirley Jean.” He closed his performance with a cover of Merle Haggard’s “The Bottle Let Me Down.

Will you be downloading the album?