Many of us have seen Kendall Schmidt grow up over the years as part of Nickelodeon’s internationally acclaimed boy band, Big Time Rush. Now, the pop star is ready to get things going with his band Heffron Drive.

Along with his friend Dustin Belt, Kendall formed the band in 2008 but took a break from it to star in Big Time Rush the TV series as well as the boy band.

In 2013, Schmidt revived the band and the duo is currently making moves. Heffron Drive, along with opening act Hobart Ocean, kicked things off with a free show at Universal Citywalk‘s 5 Towers stage on Thursday, August 7 – and Press Pass LA was in the house!

If you haven’t heard of pop-rockers Hobart Ocean, you aren’t alone. The band hails from Illinois and is made up of lead singer Travis Leonard, Steve Hopkins, Jaron Lancaster and Sweden native Matthias Hagström. The group had humble beginnings at Citywalk, performing in the Street Performer program before getting discovered and signed by a manager. We got the chance to chat with the guys of Hobart Ocean before they hit the stage. When asked about how they felt going from the courtyard to the big stage, the guys told us that they were “humbled and absolutely thrilled” to be there. They added, “Even at the sound check, to see a crowd of people seeing you sound check, you’re like, ‘Alright, this is a little bit different. [We] could get used to it.’” 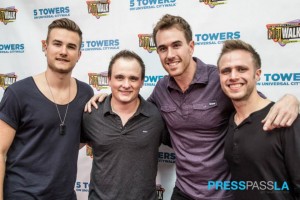 For a band that mainly performs acoustic sets, Hobart Ocean rocked the 5 Towers stage with ease and tons of energy. Leonard, a musically inclined version of Ryan Reynolds, was a natural at running all over the stage and even dove straight into the crowd to sing among the mostly-new fans. The band’s set included rock and roll-influenced original tunes including “Movies” and “Serendipity,” as well as covers of One Republic’s “Counting Stars” and Zedd’s “Clarity” before closing out with their single “Another Heartbreak.” Get ready to hear more from these guys in the future – theirs is a bright one!

After a brief break, headliners Heffron Drive made their way onstage, much to the delight of their anxiously awaiting fans, many of whom had waited for hours prior to the show. Before their set, Schmidt and Belt had promised us a “high energy and fun show,” which they definitely delivered – and more! 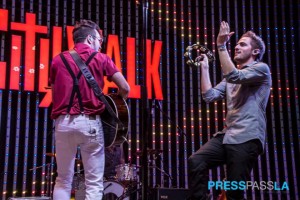 From the first note of the first song to the last chord of the final song, the guys had the crowd dancing, singing, and even jumping along during their fun-filled set. They played original songs such as “Art of Moving On,” “One Track Mind,” and “Feel So Good,” as well as their impressive renditions of Paramore’s “Ain’t It Fun” and Magic’s “Rude.” (Spotted in the audience were Kendall’s supportive “Big Time Rush” co-stars, Logan Henderson and Stephen Kramer Glickman.) Midway during their set, the duo announced their upcoming 16-song album. Heffron Drive closed out the show with their single, “Parallel.”

You can catch these guys on tour at a venue near you in September!