This year’s C2E2 brought a plethora of great guests that pulled from every avenue of the pop culture spectrum. This was never more evident than in The Thrilling Adventure Hour, a podcast and live show that brought with it a curious collection of characters. One of the most curious of those was Kevin Murphy formally of the cult TV show Mystery Science Theater 3000 and now part of the Rifftrax team. 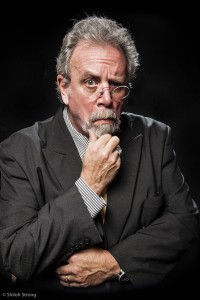 For those not in the know both Rifftrax and Mystery Science Theater 3000 pioneered the art of making fun of incredibly bad movies during the movie. Imagine sitting through some of the worst movies mankind has to offer with some of the smartest and quick-witted comedians on the planet.

For nearly two decades Murphy has been tearing into movies. Press Pass LA had the chance to sit down with him during C2E2 in Chicago last weekend to learn about his involvement with Thrilling Adventure Hour and the art of great riffing.

PPLA: How did you get involved with Thrilling Adventure Hour?

KM: I heard about it through some mutual friends and Bill [Corbett, also of MST3K and Rifftrax] and I went to see their show before we were asked to be in it. It’s just about as much fun as you can have on a stage. It’s interesting the way they do it because we both work off of scripts (in Rifftrax and Thrilling Adventure Hour) but a lot of what makes it come to life is the coloring the actors give it on stage.

We were given our script only a few hours before the show and I think did a final run through maybe an hour before the show started so there’s a lot more room for error than people realize but the company they have on stage is so good that no one in the audience knows any of that.

PPLA: Let’s talk about the art of riffing. How much homework goes into the movies you riff?

KM: Just tons. With every movie you find yourself with a chunk of film that you get to spend a week with to study. I’ll find myself doing a surprising amount of research in order to make a joke make sense or to find out who a random background actor is in a movie.

PPLA: What made you decide to branch out and do the National Geographic special?

KM: We were invited pretty much out of the blue to do it. It was great because the network gave us a lot of freedom to do the kind of show we wanted to do. All they told us was that we couldn’t swear which is something we don’t really do anyways.

It was an interesting foray for us. Long ago I pitched a fake history show to the History Channel but this was something totally different. Honestly so much of modern TV is rife for riffing lately especially reality TV.

PPLA: You’ve been riffing for close to 20 years now. What movie has been your favorite to riff? What has been the hardest?

KM: Without a doubt Twilight. Twilight was like eating candy all day long it was so perfect for us. If there was a model for the kind of movie that we look for that was it. The hardest was the Transformers movies, they made me want to die. That or Super Mario Bros. , really the only good part of that movie was Bob Hoskins and even he hated it.

PPLA: Is there any movie out there you’re really itching to riff?

KM: We’re not doing as many of the big titles anymore because they are so long but I know we have a few on our list: The Avengers, Man of Steel would probably  good ones and the very last of the Harry Potter films. You know, the Harry Potter film where everyone dies, that should be lots of fun to joke about [laughs sarcastically].