Get ready to see more of America’s “Royal Family” on television—by that, I mean the Kardashian-clan. Khloé Kardashian will be the host of an upcoming primetime talk show!

Kardashian’s talk show Kocktails with Khloé will air on FYI. Additionally, Gena McCarthy—Senior VP of Programming for FYI—announced that the youngest Kardashian sister would also serve as the executive producer for the show. 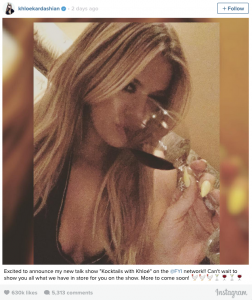 Pilgrim Studios—based in Los Angeles—will produce the talk series. The show will bring on celebrity guests and friends to sit together around a table for an intimate dinner party as they discuss an array of topics—including pop culture. Currently, eight one-hour episodes have been ordered for the upcoming series.

Fortunately, this job will feel familiar to her due to past hosting positions she held at E! and the X Factor. Are you excited to see Khloé tackle Kocktails with Khloé? Keep a look out for the anticipated talk series later this year!