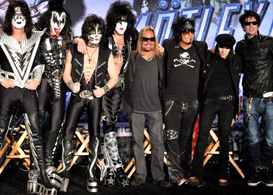 Separately, these two bands never disappoint, combining solid hard rock skills with amazing spectacle. Each band has their own loyal following, those of us that trudge out year after year to be awed yet again. The opportunity to see them both in the same evening, with a guaranteed 90-minute set a piece, was too good to pass up. And while the day of the concert dawned cold and rainy here in Chicago, it did not dare rain during the concert. Real fans tolerated the mud and the chill and were rewarded.

This tour deserves to be called The Tour, because one cannot imagine how it could get much better than this. When opening for KISS, a band has to prepare the audience for the greatest spectacle in rock and roll, and Crue absolutely delivered, starting loud, strong, and right on time. Sans Mick Mars, the band members worked their way to the stage from the audience waiving banners into the opener of “Saints of Los Angeles.” The set list stuck with the classics, including “Live Wire”, “Primal Scream”, and the ever-popular “Kickstart My Heart” to close out the show. They did manage to squeeze in the new single, “Sex”, which is exactly what you would expect from a band that is a little older, but is still in touch with having a good time.

Motley Crue was able to produce an exceptional pyrotechnic show just two days after a traffic accident that spewed their gear all over the highway outside Detriot. One expects nothing less from these veterans. Mick Mars tends to stand still, because he suffers from an arthritic degenerative disease called Ankylosing Spondylitis, but he is still one of the greatest guitar players of all time. To make up for his lack of movement, Tommy Lee straps himself into what looks like a giant hamster wheel and drums himself in a circle, keeping time with some serious house music in a nod to his side project in Electro Mayhem. And Vince Neil is, well, he’s Vince Neil. Too see these gentlemen play together is always a beautiful experience, and 2012 was no different.

When you are KISS and Motley Crue, you can afford the best roadies and techies. A special shout out to those guys who were able to completely dismantle Crue and set up KISS in what seemed like no time at all. Kudos to you guys, you are the unsung heroes of this game. Following that amazing set change, a familiar voice boomed out, calling the audience to witness “the hottest band in the world.” From that introduction through the finale, a KISS show is one of the most predictable and most enjoyable in the known rock and roll world. Not coincidentally, the first three songs have either the word “rock” or “loud” in them, followed by “firehouse”, which cues Gene Simmons spitting fire. Most of the audience knows which gimmick goes with which song, and that is KISS’ greatest asset.

These guys are the godfathers of the staged rock and roll, and even in their early 60s they are still nailing it. Simmons spit blood and then sang from the rafters, again. Paul Stanley flew over the audience to sing from the rear podium, again. The blinking KISS logo never stops, and the pyrotechnics never fail to amaze. By limiting the band to ninety minutes, not all favorites made the setlist. The band also had to play their new single “Hell or Hallelujah”, which is a great improvement over anything on their last album Sonic Boom. But by the rousing encore of “Calling Dr. Love” and “Rock and Roll All Night”, true fans were completely satisfied.

KISS remains the quintessential live rock and roll band. Its predictability has turned a KISS show into a cult film classic, complete with audience participation. KISS can always be counted on to deliver a solid show, even in the mud. And they could not have picked a better band to start the party than Motley Crue, legends in their own right with a stage show big enough to prepare the audience for KISS. When they announced this tour in March of this year, the bands agreed to call it The Tour, and it definitely lived up to its name.