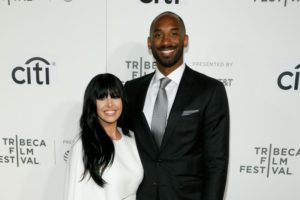 After Kobe Bryant retired from basketball, his next career move would easily qualify as a highly unanticipated and untraditional move for an ex-athlete: he wrote a poem. His lover letter to the game he’s been “deeply in love with” since the age of six was turned into a short film that premiered at the 2017 Tribeca Film Festival.

“Dear Basketball” made its Tribeca debut on Sunday April 23 as part of the Tribeca Talks series. The animated short centers around the former NBA all-star’s timely retirement from the sport that he “never saw the end of the tunnel [of].” Since Bryant is a legend himself, he naturally turned to one of the best animators to help turn his vision into a reality.

Glen Keane, a veteran of the Walt Disney Animation family, quickly became the perfect person for the task. The animator has created some of Disney’s most beloved characters, including: Ariel (“The Little Mermaid”), Tarzan (“Tarzan”), and Pocahontas (“Pocahontas”). However, creating a animated version of Bryant surprisingly proved to be his toughest challenge yet.

“The drawing that you’d see on the screen, I probably put about a half-an-hour into that drawing. You’ve got 24 frames per second and that would be the one drawing out of ten that I’d keep,” Keane explained. “This guy’s got a face that everyone recognizes and I would do drawings like, “No, this looks like Michael Jordan.’”

Nonetheless, Keane enjoyed his time working with Bryant on this project because it’s not everyday that you get to work alongside the former Lakers player in this way. He sees it as being an “unreal moment to have Kobe Bryant sitting next to you.”

The film score was created by John Williams, another legend within the Disney community that was personally recruited by Bryant to enhance the project. Williams, after seeking permission from Bryant, wound up using the same orchestra ensemble that he hired for “Rogue One: A Star Wars Story” to play the score for “Dear Basketball.” 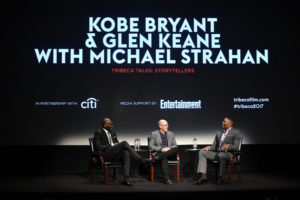 Although there hasn’t been an announcement of future distribution plans as of yet, we strongly believe this short will wow audiences outside of the festival fairly soon.

“We’ll be making announcements very soon on the distribution, looking at it on a worldwide scale,” said co-executive Dan Goodman. “He’s so relevant all over the world and it’ll be very exciting. There will be a big roll out coming very soon.”