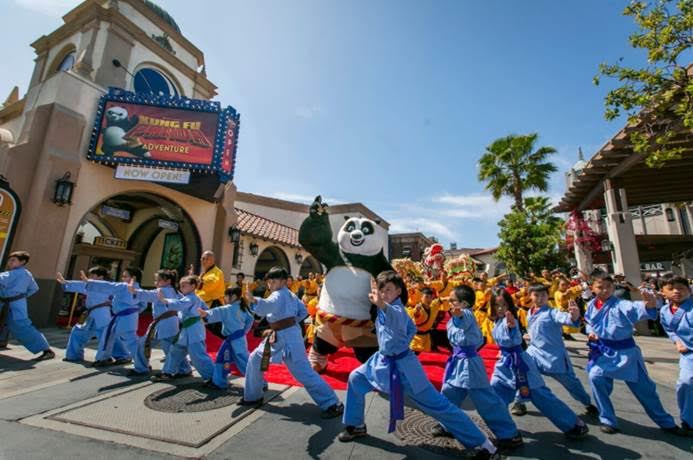 The arrival of “Kung Fu Panda: The Emperor’s Quest” marks the first attraction to open at The Entertainment Capital of L.A. since Universal’s recent acquisition of DreamWorks Animation.

Created and produced by DreamWorks Animation and Universal Creative, “Kung Fu Panda: The Emperor’s Quest” recounts a plot-filled story whereby on the morning of The Emperor’s Great Feast of Heroes, dragon warrior Po embarks on a wild and perilous mission to deliver the rare and precious Liquid of Limitless Power to the Palace, while enlisting guests to join him on the exciting adventure replete with raging rapids, river pirates, awesome magic and Kung Fu.

With cutting-edge technology at the forefront of the multi-sensory attraction, “Kung Fu Panda:  The Emperor’s Quest” introduces the first-ever integration of interior projection mapping designed to engulf guests in 180 degrees of immersive adventure.  Developed by the innovative team at Universal Creative, this never-before-adapted technique depicts a series of immersive and visually dynamic scenic designs that will transform within the interior space and enhance the story. With detailing that is so precise, it will be near impossible to realize the projected imagery is a mere illusion.

We will definitely be stopping by since we missed the preview! What do you want to see in Universal’s latest attraction?