You would think after 26 playoff games, 14 goals and a Stanley Cup championship, Kings right winger Marian Gaborik would be more animated about his sudden rise to super stardom in the city of angels. Turns out, Gaorik still remains as humble and reserved as ever. 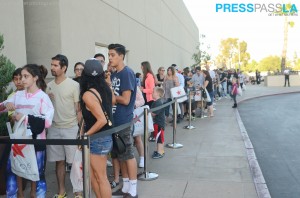 “It feels great obviously but you know the goals aren’t everything,” the 32-year-old Slovakian Gaborik said. “My most proud accomplishment was to win the cup.” However his fans, who gathered in mass at Macy’s in Sherman Oaks Tuesday evening for an autograph session, were much less reserved in their praise of the veteran hockey player.

“They couldn’t have made that run without his goal scoring abilities,” said Doug Wah, a resident of Chatsworth, CA. “He just gelled so well with guys like (Anze) Kopitar.” “He’s pretty much the main reason we won,” said Alan Tom, a resident of Van Nuys, CA.

The event, held in Macy’s in Sherman Oaks, allowed customers who purchased 35 dollars-worth of Kings merchandise to have either their products signed or get a signed picture autograph of Gaborik himself. 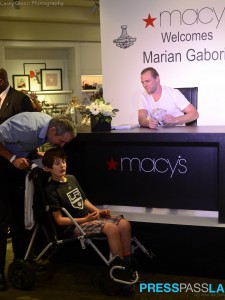 The event was run by Macy’s special events coordinator, Courtney Parrish, who also gave the Kings’ ace high praise for his treatment of the fans in attendance. “He was very kind, very good with the customers and great with the kids” Parrish said. “We know obviously Marion is not from the United States but we’re definitely celebrating the fact that he is a King this year and he led us to a victory.”

Gaborik may have been reserved in his own self-praise but for the fans he gave them their plenty of their own. “Fans are unbelievable, had great support from them and helped us through everything this year,” he said. “So it’s definitely fun to play in front of them.” Gaborik was also not shy about his affection for the city itself. “The city, the weather, (it’s) unbelievable to wake up to every morning” he said. “It just gives you the extra energy.” 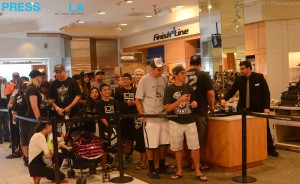 Gaborik was pre-booked two weeks ago to come to Sherman Oaks when the Kings entered the final stretch of their playoff run and the event is a win-win for everyone involved according to Parrish. “It’s a feel good event,” she said. “We like to show support, not only through Macy’s but for local partners and local events.”

For Lucy Gonzales, a resident of Arleta, CA who wasn’t even aware of the event when she happened upon the Macy’s gathering, it couldn’t be more exciting. “It was great,” she said. “I just happened to be in the mall and I was coming out and I saw all the promotion and said ‘hey, I guess I’ll jump on the bandwagon.’”

Parrish stated that original estimates were that around 200 fans would show up to the autograph signing. The event ended up exceeding expectations according to Parrish as 225 people got their merchandise signed and an estimated 75 to 125 stood around to watch as Gaborik did his signings. “Our estimate was 200 but obviously we were able to get through more so that was great,” she said. 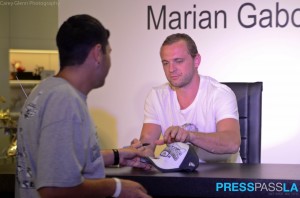 In the end, the word on most Kings fans minds are will Gaborik, a free agent this summer, return to the city that helped him achieve championship glory? While he was unsurprisingly reserved in his response, Gaborik certainly did not rule out the possibility. “We’ll see what’s going to happen but I would like to stay,” he said. While it may not be a definite yes, there is no denying Gaborik’s place on Lord Stanley’s trophy and the imprint he has left so far in Los Angeles.