LA Pride Weekend brought together thousands of people in West Hollywood that are supporters of the LGBT community.

Amongst the participating supporters included a star-studded lineup. As in previous years, this year’s event featured a weekend-long music festival that incorporated big-name acts including Tinashe and Kesha as Saturday’s top performers. 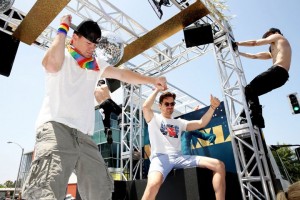 The cast of Magic Mike XXL get down at the LA Pride Parade.

Kesha helped to close the concert for Saturday’s lineup with a fun and outrageous set. As she performed that night, the pop singer wore a rainbow-themed ensemble.

Likewise, Becky G and Fifth Harmony were a big draw on Sunday as they rocked the crowd during their sets. One of the most talked about moments occurred at the LA Pride Parade on Sunday. Magic Mike XXL stars Channing Tatum, Matt Bomer, and Adam Rodriguez rode on a float in an effort to promote the upcoming sequel. During this occasion, the actors showed off their impressive dance moves.

This year’s event was a memorable one, at that. We hope you had a great Pride Weekend, LA!