Beautifully shot and excellently scored – A Country Called Home takes its audience through a slice of Americana while exploring themes of new beginnings.

From first time feature director/super hero secret identity Anna Axter comes the story of Ellie and her journey home to Texas to pay her last respects to her estranged father. An in-your-face script leaves little to the imagination as Ellie deals with funeral arrangements, her father’s alcoholic girlfriend, and her newfound transgendered friend Reno.

A Country Called Home falls flat in many aspects. Ellie is forced to stay in the small Texas town through a comedy of errors that seem unnatural and only written in to keep her there – there is no sense of subtlety. Reno (played masterfully by Mackenzie Davis) is only alluded to as recently transitioned, but faces a kind of cartoonish bigotry one would expect to come from an ‘80s shock comic.

The film’s triumphs, however, are many. The cast is excellent. Ellie, played by British actress Imogen Poots, conveys a subtext that is not in the source material. The burgeoning friendship between Ellie and Reno is the driving force behind the narrative. Davis and Poots have a palpable chemistry. 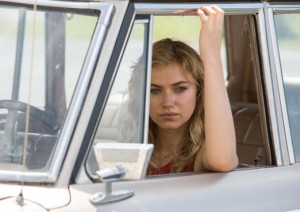 Most surprisingly, the show is stolen by Amanda (Mary McCormack), Ellie’s almost step mother, who is ill-equipped to deal with life, turning to everyone and everything, including a hefty amount of booze, in order to avoid relying on herself for anything.

One final note – the score might be worth a viewing on its own. Ryan Bingham, who also co-stars in the film, performs an angelic acoustic soundtrack that perfectly accompanies the themes of the film