Frank. It’s about music, cohesion, depression, hate-sex, suicide, and reconciliation over a giant paper mache hat the titular character always wears. Even in the shower. That more or less sums up this quirky indie based on the late British comic Chris Sievey’s character Frank Sidebottom.

Jon (Domnhall Gleeson) is just a regular dude who wants to be a famous musician. By chance he hooks up with the helmeted Frank (Michael Fassbender, who must have thought Magneto’s helmet was too revealing) and his band who immediately takes him out into the wilderness like Thoreau to commune and record. The rest of Frank’s band is also a kaleidoscope of weirdness and mental instability, giving a perpetual melancholy to a film that has fun and funny moments, but does not want the audience to actually enjoy them.

As Jon’s influence in the band grows, so does the rift between the rest of the band members, who are not down with Jon’s constant tweeting about their recording and his insistence that they play the SXSW festival. The pressure may be a bit much for this band whose collective psyche is as fragile as Frank’s silly security blanket.
From here this The Beaver meets Hustle and Flow enigma spirals a bit. The film manages to ask a few pertinent questions about its characters. Like, is Frank a musical genius? The scenes where they are actually making music are an interesting take on the creative process. But the further they go with Jon, the greater the divide within the band itself. We soon realize that Jon, despite his affable nature and good intentions is actually the antagonist of the film, but of course does not realize this. He wants Frank to live in the material quotidian world, to share his genius and realize his dreams, which are actually Jon’s dreams. Eventually the clash between their different natures comes to a head (do ya get it? Head? HA!).

By the way, Maggie Gyllenhaal is also in this movie. Had trouble noticing her, she just sort of blends in, which may seem like a backhanded compliment, because it is. But she might be the most sane and rational of all of these people, including Jon. She was the one who disliked Jon from the get-go, and not just in that played out ‘hate the new guy’ way. Something more than that.

So aside from what I listed at the beginning, this film also seems to be about collective mental health, and the like-minded people you find along the way. Frank’s genius may not be in music, but instead may just be in bringing these damaged people together musically to connect in a way that their quirks may not allow otherwise. Will Jon realize this before he destroys it all? Is he Pete Best (original drummer for The Beatles)? Or is he Yoko? 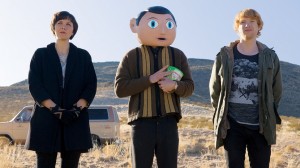 This is a film that is hard to quantify, based mostly on its quirky nature that some will surely deem genius. Frank does address some important issues regarding mental health, and music’s possible role in healing/dealing with that. The movie is also fairly unremarkable, because nothing much really happens. The conflict between the Frank’s world and Jon’s is as old as art itself, and unfortunately offers little more than a sad solace that at least you are not the only crazy one out there.