Writer-director Patrick Brice delivers a racy and yet heartfelt comedy in his latest feature The Overnight.

From the very first frame viewers will find the film laugh out loud funny. A few years ago a film like this may not have been green lit, but with past successes by films like Bridesmaids and This is 40 Hollywood seems more willing to take a chance on the raunchy hilarity of every day. The Overnight delivers perfecting casting in the films four main actors Taylor Schilling, Jason Schwartzman, Adam Scott, and Judith Godreche.

The Overnight follows newly minted L.A. transplants (Scott and Schilling) as they tackle the adult barrier of making new friends in a new city.  A chance encounter at their neighborhood park with the ever gregarious (Schwartzman) begins an eccentric encounter with a laissez-faire couple in their outlandish LA home. 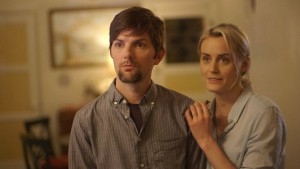 The film’s four main actors tackle the somewhat bizarre material with such grace, and wit that you can’t help but be lured in.  The Overnight is well worth a watch. A welcome comedy featuring the daily life of long-term marriages, awkward experiences, and rocky relationships.