It gets really difficult to defend Hollywood sometimes. Whenever someone comes out and says, “Hollywood is officially bereft of good, original ideas,” as a critic, I feel compelled to rush to her defense. However, with entries like director Steve Pink’s About Last Night, such a defense becomes all but impossible.

Our story centers around four Los Angeles bound singles, namely Berne, Danny, Joan and Debbie played by Kevin Hart, Michael Ealy, Regina Hall and Joy Bryant, respectively. The film takes them on a journey through what is known as the greatest story ever told; boy meets girl, boy loses girl, boy gets girl back – I guess I should say spoiler alert in that regard. However, with the knowledge that this is a romantic comedy that takes absolutely no chances and does very little to expand the genre, the word spoiler should be taken with a grain of salt.

The first real complaint is the characters themselves, particularly Hart and Hall. From 2013 to date, Kevin Hart has appeared or starred in no less than 8 movies. Sadly, you could take any of his characters out from any one of those movies, replace it with another and nothing would be missed. The disappointing part is how talented, intelligent and funny they are; and yet, Hall and Hart continue to be pigeon-holed into roles that ask the absolute least of their abilities.

The biggest issue with this movie is just how little it offers to the audience. For the last 20 years or so, the romantic comedy genre has been combined with other stories. For example, with a film like The Break Up, even though the movie was about a developing relationship couple, there were developments and complexities that made it about more than a traditional relationship. Everything in About Last Night borrowed influences from other films, didn’t quite live up to others in its genre, and was just generally boring to watch.

Most of the film’s comedy and memorable scenes came from the sexual exploits between Joan and Bernie. The dialogue between them while in the throes of passion in of themselves were mildly amusing; however, the acts, which were apparently supposed to be getting their own share of laughs, were neither shocking nor particularly comical. 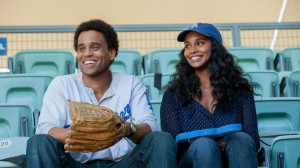 The best thing the movie has going for it is just how grounded Ealy and Bryant are in reality. The hills and valleys of their relationship all seem like legitimate fun and problems that real people would go through, making it a much more relatable film and, therefore, more sympathetic characters. You want them to succeed and be happy because their plight feels real to the audience. It takes a strong acting presence as well as a well-crafted story to elicit such a response. However, that doesn’t negate the story’s lack of intrigue.

The pacing of this film is at the heart of the issue. We see so much of their budding relationship over the course of a year through montages, flash forwards and references. Usually, in film, you go through those to get to the heart of the story while still lending credibility to the development of said characters to get from where they start to where they end up. In About Last Night, nearly the entire film goes through such a process, giving an air of “yes, this is a romantic comedy, and we are just rushing to the breakup so we can get to the part where they get back together and you can have faith in love and relationships again.” The previews painted this film as a buddy comedy that just happened to feature relationships; and yet, there was not nearly enough establishment or development. If anything we see them grow apart as a result of their respective relationships.

The movie, in of itself, is not truly bad per se. The acting is convincing, the story is sympathetic and the settings were actually quite attractive. There is just nothing special, unique or interesting about the movie to make it worth the cost of a movie ticket. One and a half stars out of four. Wait for the DVD!

In theaters nationwide this Valentine’s Day. Watch the trailer.