Last Supper, a new movie from indie filmmaker Param Gill, is most definitely not for everyone. The movie tells the story of two escaped mental patients who want to make a movie that will highlight their heroism in saving a princess.

Honestly, that’s the plot. Along the way they run into the harsh realities of everyday life in Los Angeles and make friends with a prostitute. Strangely, this is a comedy. 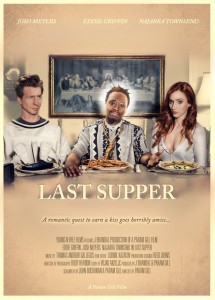 The highlight of the film is its main star, the criminally underrated Eddie Griffin. At this point in his career the comedian has been around awhile and is without a doubt the veteran actor of the cast. As Fumnanya, a native-African being held against his will at a mental hospital who convinces a fellow inmate to escape, Griffin more than holds his own.

The problem is with the script itself. Though billed as a comedy there are moments of real drama that get played as comedic, something which can be jarring for the audience. The matter-of-fact soundtrack with its weird happy-go-lucky score doesn’t help matters either. It is as if someone had the idea for four or five different films and just put them all in a blender.

The rest of the cast is right about where they should be in the direct-to-video level of talent. Josh Myers, for instance, who plays Fumnaya’s partner-in-crime, is talked about as if he was a hardcore stoner and a lunatic but never shows signs of either quality in the film. It is as if the filmmakers decided that if they simply told the audience it was true enough time they would automatically believe it.

Still, the film itself is not without merit. It was screened on opening night of the San Francisco Global Movie Fest 2014 and swept the event with five award wins, including Best Director – Param Gill, Best Actor – Eddie Griffin, Best Actress – Najarra Townsend, Best Editor – Ludmil Kazakov and Best of Fest. Ultimately, Last Supper is one of those movies that is best enjoyed on a late Saturday night with friends.