Le Week-End, about an older couple finding love again on their anniversary in the streets of Paris, has all the makings of a great indie romance. The only problem is it is also one of the most bitter and depressing love stories to be released in a long time.

To be fair, that lies in the fault of the writing, not the cast. The cast is spot on with leads like Jim Broadbent and Jeff Goldblum all of which give it everything they have. But an A-list cast does not immediately make a movie good, it just makes it more tolerable.

Fans of romance films will find it hard not to make comparisons to the much better Before Sunrise and Before Sunset. While the premise of the two is very close, Richard Linklater’s attempt to find love in the streets of modern day Paris is far more genuine.

Much of the problem stems from the plot, both Broadbent and Lindsay Duncan are excellent performers but they go through moments of such intense hatred of each other that you will find yourself squirming to get out of the movie.  Duncan’s portrayal of Meg is so contradictory at times it doesn’t make sense. One moment she is proposing divorce to her husband at their anniversary dinner and then, not 10 minutes later, completely forgiving and somewhat in love. The fact that it changes literally from scene to scene makes her an inconsistent character that the audience will have a hard time investing in for two hours. Broadbent is only slightly better as her husband who, despite being constantly abused by his wife, continues to stay with her.

Imagine having to watch your parents fight and debate divorce for almost two hours on a screen that you can’t look away from, it’s that kind of movie. Only a few times does the film take a refreshing breather when Jeff Goldblum finally comes into the picture. To be honest, his role is so short it could really be called a cameo. Still, it adds just the right amount of light heartedness to the movie that it desperately needs.

There’s really no good reason to see Le Week-End in theaters. While not a terrible film, there are just far too many other movies out there that are more enjoyable.  Wait until Netflix. 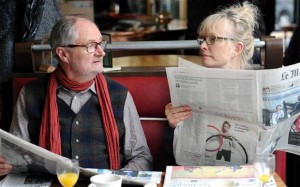 Le Week-End opens in theaters March 14. It will be opening at The Landmark in West L.A. and Angelika NY, Lincoln Plaza in New York City.