The intersection of art and transportation is usually a pairing kept sacred for car chases and drive-ins. But Lexus and The Weinstein Company found a way to collaborate and bring two short films to life that offer up beautiful portrayals of life and love with just a subtle hint of luxury car thrown into them. 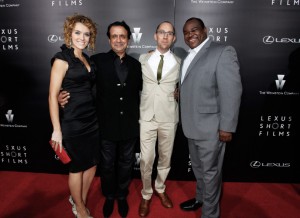 For the second year in a row, The Weinstein Company presented the Lexus Short Film series. Directors Jon Goldman and Satsuki Okawa had their two shorts, Market Hours and Operation Barn Owl, played in front of a packed Regal LA Live in downtown Los Angeles on Wednesday night. The audience was also shown a vignette of interviews and behind the scenes footage of the directors with mentors from the film community, including actress Katie Holmes and directors Justin Chadwick (Mandela: Long Walk to Freedom), Simon Curtis (My Week With Marilyn, the upcoming Woman in Gold), Antoine Fuqua (Training Day, the upcoming Southpaw), and Phillip Noyce (The Giver).

The films were very well crafted, but only time will tell if this opportunity working with the industry’s most well respected distributor will lead to a substantial film career for either of them. While the up and coming directors were the focus of the night, the event also served to give The Giver a much needed promotional push as it enters the final two weeks before its theatrical run begins in mid-August.

A number of notable actors came out to support the filmmakers, including Kristen Bell, Allison Janney, and Larry Hankin. An after party was held at WP24 by Wolfgang Puck at the neighboring Ritz-Carlton. 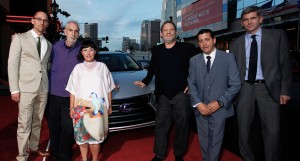 The Lexus Short Films series will premiere online in October this year. In the meantime, the films’ progress and film festival schedule can be followed at www.lexusshortfilms.com.