When a zombie movie comes out, you know it’s going to be a zombie movie – make no bones about it. On that note, Life After Beth is not your ordinary zombie movie. It’s a combination of a romantic comedy, action, drama, and zombie flick all rolled into one. 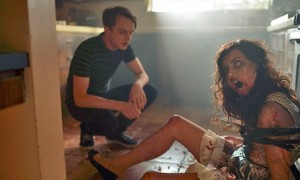 The film begins with Zach (played by Dane DeHaan) mourning the death of his ex-girlfriend Beth (played by Aubrey Plaza) after she dies from a snakebite when she goes hiking in the mountains. He spends the next couple of days with Beth’s parents (brilliantly played by Molly Shannon and John C. Reilly) and ends up bonding with her father over a joint. Beth’s parents take to Zach and console him, treating him as part of the family. One day, though, the parents mysteriously cut off all communication with him, not answering his phone calls and pretending they’re not home when he rings their doorbell. Zach feels that something fishy is going on, so he investigates at the family’s home. He comes to find out that Beth is alive and that she had returned from the dead, despite the denial from her parents.

This is where it gets strange. While Zach suspects that Beth is a zombie, it doesn’t really seem to faze or hit him until he sneaks Beth out for a romantic late night date on the beach. He acoustically sings a song that he wrote for her and she loses it – she starts to become the monster she really is, gets angry, and shows off her ridiculous strength she acquired as a zombie, accidentally sending the lifeguard stand up in flames. On the way to sneak her back home, Zach discovers that the only way Beth will calm down is by listening to a smooth jazz station. 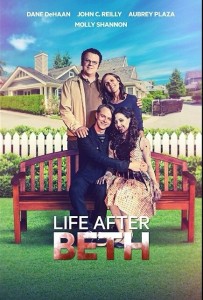 One major issue with the movie is that nothing is really explained at the end, like why the zombies came back or why they were fine and then all of a sudden started to want to eat people. Also, you really want to root for Beth’s character, but it’s tough – and never gets around to happening.Plaza is really in her element as the snarky Beth whose constant eye rolling and sharp tongue make her the epitome of an angst-filled teenager. When she finally starts to unravel as a zombie, that’s when she really shines. A pivotal part in the movie is when Beth is found by Zach, tied to her oven as she is being fed her mother’s tendons – that’s when Zach realizes that there is no more hope for Beth, making it the beginning of the end.

Despite its storyline flaws, it’s an overall entertaining zom-com that should be given a chance. Aubrey Plaza gives the perfect performance as zombie Beth, Matthew Gray Gubler as Zach’s authority and gun-obsessed brother has a scene stealing moment or two throughout the film, and the soundtrack is pure perfection. Anna Kendrick, who plays a family friend of Zach’s, is easily the movie’s scene-stealer – after all, she is the only one who seems sane and despite her few minutes in the film, you really root for her.

Life After Beth is in limited theatrical release beginning August 15. Watch the trailer.