A faint, blue light graces the stage, illuminating a guitar case reading Nick Santino. After breaking up with A Rocket to The Moon in 2013, Santino is now a solo artist with 8123. As all of us anxiously wait, he finally walks on stage opening for The Summer Set and headliner Sleeping with Sirens  on the We Like It Quiet Tour.

Santino’s latest album was released in May of 2014 and tonight he delivered some of the best songs on that record. Playing songs like “Bad Taste”, “Long Way Home”, and an incredible cover of “Smells Like Teen Spirit”, Santino definitely bewitched everyone in the room. 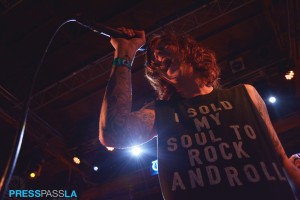 The next on stage was The Summer Set, an American pop punk band originally from Arizona and currently signed with Fearless Records. The band consists of Brian Logan Dales (lead vocals), Jessica Bowen (drums), John Gomez (guitar, piano, backing vocals), Stephen Gomez (bass, backing vocals), and Joshua Montgomery (guitar, backing vocals). The unbelievable, positive vibe that radiates off this band is incredible. While performing one of their most well known songs, “Lightning in a Bottle,” everyone in the crowd was dancing and enjoying themselves.

The band even premiered a new song off their upcoming album Wasted.  And despite the title of the song it is an incredibly uplifting and inspiring song with lyrics such as  “at least we know that youth wasn’t wasted on us.” Ending their set with “Legendary” from their latest album released in 2013, The Summer Set definitely left their impression upon the audience.

Finally, the headliners Sleeping with Sirens graced the stage. An American rock band from Orlando, FL consisting of Kellin Quinn (vocals), Jack Fowler (guitar), Gabe Barham (drums), Justin Hills (bass), and Nick Martin (guitar) signed with Epitaph records. On their latest album, released earlier this year (Madness), there is a song called “We Like It Loud,” which is where this acoustic tour has pawned it’s clever name, “We Like It Quiet.” Sleeping with Sirens played songs from all four of their albums including “Free Now” (Feel 2013), “Who Are You Now” (Let’s Cheers to This 2011), “Save Me A Spark,” “Strays” (Madness 2015), and even a few covers including “Iris.”

Every moment of this evening was bittersweet because you never wanted it to end. All three of the acts are phenomenally talented and seeing these artists leave the stage will forever leave you wanting more. If you aren’t familiar with any of these artists, please do yourself a favor and listen…”