Lil Wayne has a big announcement for his fans and it includes working with Jay-Z. At his recent Summer Jam 2015 performance Lil Wayne announced that he signed a deal with Jay Z.

The brief announcement caused many fans to believe he was actually signing a record deal with Jay-Z. No, Lil Wayne is not signing with Jay-Z’s Roc Nation label but he is joining Tidal, Jay-Z’s music subscription service. 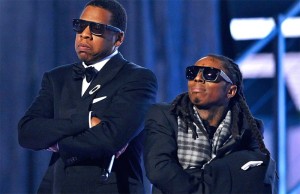 In other words two of the biggest names in hip-hop are collaborating, between Jay-Z and Lil Wayne there are plenty of #1 hits and Grammys. Lil Wayne is now a co-owner of Tidal, joining artists Nicki Minaj, Madonna, Beyoncé and Rihanna.

Fans are still hoping that Lil Wayne will release Tha Carter V, but in the mean time they can tune in to his new exclusive track “Glory” on Tidal. Since Tidal’s release it has taken the music world by storm with over 25 million tracks and 75,000 music videos.