Lisa Vanderpump is continuing to grow her expanding Hollywood hotspot empire with the opening of her new West Hollywood restaurant, PUMP Lounge. The location is smack dab in the middle of the action in West Hollywood and Press Pass LA was there with the celebrities celebrating the red carpet opening of the venue. 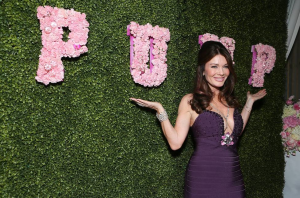 The Bravo TV personality made sure that her signature color, pink, was in full force on the red carpet with flowers spelling out “PUMP” on the red carpet backdrop and throughout the entire space. Vanderpump was spotted posing for photos on the carpet while trying to nab former *NSYNC member Lance Bass for a picture.

Bass was busy talking up reporters about his upcoming wedding special on E!. He shared that it would be “a one-hour event” on the network. Also spotted was boxer and Dancing With the Stars alum Vicious Victor Ortiz who told us that he was trying to get former troupe member Julz Tocker to head down to the festive party.

Inside the cozy setting, Slade Smiley was taking pictures of his fiancée Gretchen Rossi who was posing with her friends while sporting a black crop top paired with a white skirt. Ross Mathews was also milling about with his longtime boyfriend, Salvador Camarena, on the hot May night. 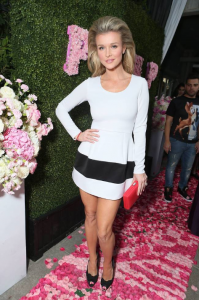 Real Housewives of Miami star Joanna Krupa left the party early only to return to meet up with fashion designer Michael Costello and his entourage. They gabbed about Costello’s upcoming fashion show in Miami on May 17. She looked stunning in a white dress with a single black stripe that highlighted her long legs.

There was even a Vanderpump Rules cast member who was off the clock and enjoying the opening night festivities. Scheana Marie flitted about the party while sharing that she’s gearing up for her July wedding to Michael Shay. 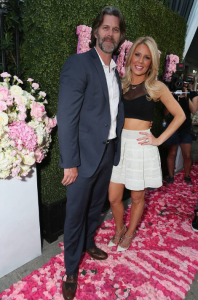 PUMP Lounge will be open to the public beginning on Friday, May 16 with a kitchen helmed by Penny Davidi and a bar tended by the best-looking men in Los Angeles. It’s guaranteed to be the neighborhood’s hottest new place to gather.