The first day of Lollapalooza 2015 in Chicago was filled with both history making moments and sigh inducing sets that never really worked.

By this point Lollapalooza has become a mainstay in the Chicago music scene. For about a week it takes over every aspect of life in the city and is impossible to ignore. So with that large of a cultural stage it is surprising how much the festival seems to have dropped the ball the past couple of years.

Thankfully the one performance that quite literally saved the entire festival came on the first day, allowing everything else to seem rosy and perfect for the rest of the festival. Few performers outside of Sir Paul McCartney could have pulled that off. As the main headliner on Friday night his set was a breath of fresh air. 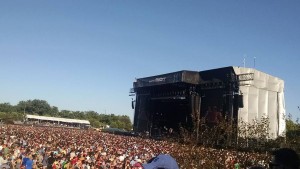 Millions gathered in Chicago for Lollapalooza 2015.

McCartney’s set covered most of his career not just with the Beatles but solo as well. Even at 73 years old, easily 20 to 30 years older than most of the musicians playing the festival, he still put on one of the longest sets I’ve seen during the entire run of the festival. Constantly switching instruments and keeping up a happy banter with the million people in the audience the entire show was without a doubt the highlight of the entire festival.

The first day was really all about soul, at least for half the festival. With bands like Father John Misty, Alabama Shakes and Gary Clark Jr. a healthy dose of raw soul was infused into the festival. Alabama Shakes proved once again why they are one of the best bands in the industry today. Expect them to be the big headliner at Lolla and other fests next year.

And yet that deep-rooted soul vibe only felt like an afterthought depending on what part of the venue you were residing. A quick look around Grant Park made it increasingly obvious that many weren’t there to see any particular band, but rather to get wasted at the all-day rave that is the Perry’s Stage.  The Perry’s Stage was added on a few years ago to cater to the EDM crowd and has since attracted such a crowd that feels like it is ready to take over the festival itself.

That could spell the downfall of Lollapalooza as EDM culture, while culturally relevant, takes away from the main goal of the event which has always been about rebellion. As a point of reference, compare the 1991 lineup of Lolla (Jane’s Addiction, Living Colour, NIN, Fishbone, Butthole Surfers) with its current roster (DJ Mustard, The Weekend, SNBRN and Light Em Up). Granted there is an almost 20 year difference between events but the style and tone of the fest has changed so completely you can’t help but notice.
That’s not to say that there isn’t any hope for Lollapalooza. Perry Farrell is a great musician and businessman it is just unclear whether or not he’s aware of what his festival has become over the years.