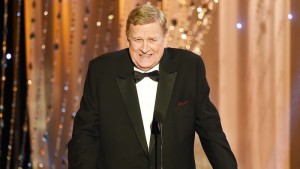 She continued,”Ken did great work all his life – as an actor, as the president of our union, and for our Foundation. For more than four years, Ken served on our Board as an outspoken advocate for the emergency assistance, catastrophic health fund and scholarship programs for union members and their families in need of a leg up. He was also an ardent supporter of the Foundation’s free professional programs which help union members build their careers and develop their craft.”

Howard was an actor for nearly 50 years both on Broadway and in television and film. Some of his more memorable credits include roles in Michael Clayton, Clear and Present Danger, 1776, The White Shadow and 30 Rock.

During his career, he won a Theatre World Award, a Tony, and an Emmy. He was the final president of the Screen Actors Guild (2009-2012) before their merger  with the American Federation of Television and Radio Artists and became the very first president of the joined union SAG-AFTRA.