LORDE RULES THE GREEK DURING HER TWO NIGHT STAY

Anticipation for Lorde’s Greek Theatre performances seemed to be stirring around Los Angeles on October 6 – night 1 of her 2 night stay. To be completely fair, I went into this show with very high expectations. 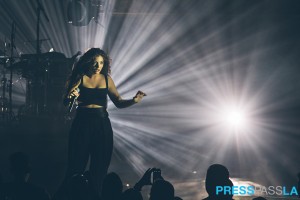 I had first seen Lorde at her very first Los Angeles show in the middle of the crowded, always dark lit Echoplex. Lit with dim lightbulbs and slightly jolting around stage at the time, I was excited to see how much an artist can grow in such a short period of time.

Backed by a simple black curtain, Lorde walked on stage Monday night alone, with no fireworks or huge lead-in, just as you’d want her. A tame “Glory and Gore” opened the night. Quickly after, the curtain dropped revealing Lorde’s synth backing band and a beautifully understated stage, 3 square screens above. And finally…the lights.

There were moments in Lorde’s set that I was pretty sure I blacked out, mostly due to the intensity of her light show and the screaming of high school aged bitties to my left. It all seemed to perfectly flow with Lorde’s new, costume-changing stage presence however, and we all raved along expectantly (sometimes closing our eyes).

Lorde graced us with two very different covers to help fill the time, since she only has one LP under her belt at the moment. Kanye West’s “Lights,” which was accompanied by…you guessed it, very intense lighting, had the crowd whispering and looking for the great Kanye, who regretfully did not come out. The second cover, a slow, electronic take on Bon Iver’s “Heavenly Father” saw the crowd taking their beer-pressured bathroom breaks, but was one of the more beautiful music moments of the night.

The now infamous “Royals” had an earlier-than-expected appearance in the set, with Lorde coming out in a gorgeous red gypsy-like dress and the stage changing to a bright, theater-esq background. Lorde egged on the crowd, and we finally had our moment to sing in beautiful unison together.

“We almost never play this song…” was the introduction to Lorde’s new single, Hunger Games famed “Yellow Flicker Beat”. Production was all set, however, and images of Lorde’s lips humming the opening chords began. A small glimpse of what we are to expect from this growing artist, the song was by far one of the best and most intense performances of the night.

“Team” and “A World Alone” closed out the night (before 10pm, I’d like to add — love the Greek!) and confetti signaled a short but sweet goodbye from Lorde.

Full of her signature “dance” moves and gorgeous hair flips, Lorde did not disappoint at her first headlining show in L.A. in over a year. Fans were picking up confetti on their way out of the venue, swarming the tour buses and dancing their way down the hill to their stacked cars. 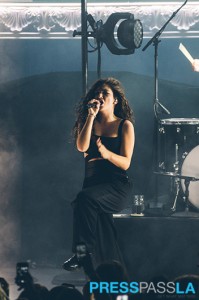 Overheard in the crowd, “I hope she didn’t pull a neck muscle, or all her muscles…” As long as her young and fiercely strong vocal chords remain in tack, I think Lorde will be just fine. Better than fine. Royal, even.