GETTING TO KNOW THE LORDS OF MERCY

Press Pass LA sat down with thrash metal band and Asbury Music Award-nominees Lords of Mercy about their upcoming tour with Anvil.

Formed in 2011, Lords of Mercy are connected to the notable New Jersey musical grassroots organization Old Bridge Metal Militia, which paved the way for some of today’s top heavy metal acts such as Metallica, Slayer, Anthrax, Anvil, and more. The band consists of Danny Anniello (Guitar), Pete Perrina (Drums),
Joe Stabile (Bass) and Brandon Sweeny (Vocals). We chatted with Danny about the bands upcoming tour dates.

PPLA: You are a relatively recent band having formed in 2011 in Old Bridge, NJ. This happens to be my hometown!  How did the members meet and the band come together?

DA: I was playing in a band that my great friend and Bass player Joe Stabile had asked me to join but things did not work out and the music was not the direction I had wanted to go in. I decided if I was going to give it 100 percent I had to start a new band that was exactly like a band I would want to hear today and run out to get their CD. So I put the word out there and was getting a great response from musicians in my area, one being Pete Perrina a great drummer who I had known and been friend with. So we set up a day to jam and the next day Joe Stabile  had called and felt the same way about the last band we were in and said he would like to stick together and join the new band I was forming. Of course I was thrilled because he and I have an amazing work relationship together as well as a great friendship.

So the jam went great to say the least and then we just needed a lead singer. We wound up doing our first show a few weeks later in NYC with me singing lead vocals and we backed up Joe’s friend Don Jamieson’s Band Gunfire ‘n Sodomy who also had Jerry Gaskill from Kings X playing drums. We all hit it off real well and they invited us to a party for the fourth of July which we attended.

At the party there was this great cover band called Psycho Daisy and we were watching the lead singer and we just looked at each other and said ‘that’s our guy!’ He was so great and fit with us perfectly. Brandon Sweeny became our lead vocalist and Lords of Mercy was Born July  2011.

PPLA: Old Bridge has so much music history, do you have any favorite memories, moments or local venues there that are near to the band’s heart?

DA: Oh yeah, plenty. Actually the Old Bridge Metal Militia started in the 80’s and so many great bands were in our area at the time like Metallica , Anvil, Raven, Anthrax etc. Jon and Marsha Zazula had a record store in Old Bridge called Rock ‘n Roll heaven which was is where we all bought the new rock and metal albums.They eventually started a record company called Megaforce and started having a bunch of local shows with all these great bands.My drummer Pete Perrina used to help the bands a lot and was a big part of that scene along with Rockin Ray Dill and Metal Joe.Bands like Metallica would even play at their parties and it was just some great times we had.I could on and on. As far as great venues in the area , there was the Fountain Casino, Emmet’s,Birch Hill, Playpen,Willy’s, Close Encounters and more. All great clubs with great memories.

PPLA: What bands or musicians do you consider your influences? Your current competition?

As far as competition, I never really looked at other bands like that. I always felt that doing our best and giving 100 % is what we should focus on.There is room for all bands to do well. For instance just because I may have bought the new Foo Fighters CD does not mean I can’t buy the new Slash CD. Hell get ’em both you know? I love so many bands and though some I like more than others, it just happened that way. I never compared them.

PPLA: What sets your music apart in the world of hard rock and metal? And where to you see the future of heavy metal music going?

DA: I consider us a little more hard rock than metal, but we are right on the wire so either is cool with me. What I think sets us a part from some of the band out there is that we are not following any trends or the direction many bands are taking these days. We are just doing it our way and really sounding a little more vintage but with a modern style as well. I can not compare us to anyone out there, we are heavy but stay melodic at the same time and just being direct and simple as well. There is a lot of variety in our songs,they are very different from each other but you can tell it is us. At least we can (laughs).

PPLA: What are your favorite songs to perform live? You are currently touring with Anvil, do you have any faves from their lineup? Do you ever collaborate on stage during the tour?

DA: I enjoy them all of course, but I really like playing “Paralyzed” a lot.Also “Your Time Is Gonna Come” and “Walkin’ A Thin Line.” Doing shows with Anvil is always a great time.They are such great guys and friends. Some of my favorites from the band are Scenery ,March of the Crabs, Metal on Metal, School love, They have so many classics. Their latest album Hope in Hell is great as well. 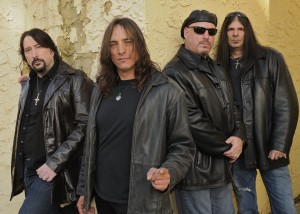 PPLA: Growing up in New Jersey, a state known for producing musical greats and not just in the metal field, who did you grow up listening to and admiring? Did you always dream of becoming musicians?

DA: I used to sneak in the clubs when I was in my teens and loved watching bands like Twisted Sister and a great local band called White Tiger.There was also TT QUICK and Dreamer who were great as well. I can speak for the whole band stating that we all always wanted to be musicians and we are living the dream playing in Lords of Mercy.

PPLA: Did you ever play the famous Birch Hill Club based in Old Bridge N.J. in bands during your youth (as that club would have closed prior to 2011).

DA: Yes I did with my old band Taylen Storm who my bass player Joe Stabile was in as well and he played Guitar at the time. Joe is also a great guitar player as well as bass player. My other band Drezden Black played the Birch Hill as well. I loved the Birch Hill, so many great times there.

PPLA: What is next for Lords of Mercy? What can fans expect to look forward to?

DA: After the dates with ANVIL we are planning on shooting a few videos for our self-titled album and writing a lot to get ready to record our second album in 2015 sometime. Then of course more and more shows.