AT A LOSS FOR WORDS 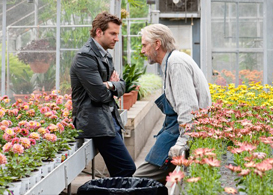 Despite the potentially misleading title, the film The Words isn’t about specific literary works or even about plagiarism. Rather, directors Brian Klugman and Lee Sternthal’s film is about the words themselves and the power that they can have over people. Starring Dennis Quaid, Bradley Cooper, Zoe Saldana, and Olivia Wilde….it just might leave you, well, speechless.

The plot of the film is somewhat complicated. It is about author Clay Hammond, played by Dennis Quaid, as he is reading his novel The Words to an audience. The novel is the primary focus point of the story, making Hammond and the characters he interacts with little more than framework, despite the fact that they are the only ones who exist in a true reality.

The novel is about Rory Jansen, played by Bradley Cooper; a struggling author who has a great amount of talent, but just not quite enough to break into the world of publishing. He stumbles upon an old attaché case while honeymooning in Paris with his wife Dora, played by Zoe Saldana, and they take it home. After his life’s work is rejected by every agent he shows it to, he is going through the case and finds the greatest book he ever read; which, before long, he goes about making it his own. He gets it published and, through it, reaches untold levels of literary success, eliminating every worry he ever had. That is, until the original owner of the briefcase, an old man, played by Jeremy Irons, who doesn’t even have a name in the story, confronts him with what he knows is the truth.

As we find out, it was his case that Jansen found and his story that was published. What is so likable about this movie are the events in the second half of the second act and the third act; which is also brilliantly set up by the film itself. Hammond reads the story in parts, creating tension within the plot; which is delightfully broken up by his interaction with graduate student Daniella, played by Olivia Wilde. The story within the story can be difficult to follow, but it is not the weak point of the film.

Unfortunately, the movie suffers from a rather dull second act. After all, we know that the book is going to be successful and the movie drags its feet to getting to the confrontation with the old man. Sadly, there isn’t enough of a building action to get to this point, and even the onset of the confrontation itself is poorly paced. Perhaps that was the filmmaker’s way at hinting at some of the weaknesses in the writing of Hammond that he hints at in the third act, but that is perhaps giving too much credit.

The characters are fantastic, but Jeremy Irons steals the show; even though he doesn’t even have a name. The wife is strong, independent and supportive, Jansen’s father is supportive but realistic and Jansen himself, more or less, nails the trials and tribulations of a struggling writer. The size of the cast is perfect; large enough that we are given enough different characters for an interesting and dynamic story, but not so many that it is impossible to keep up with everyone and everything. One of the things that has always made a book better than a movie, other than the fact that a novel has about 300 to 700 pages to work with whereas a movie has to be made in under two hours and appeal to a significantly wider audience to be considered successful, is that a book always leaves a lot to one’s imagination and interpretation whereas a film has to show you everything. Here, the film leaves a lot of interpretative questions unanswered that  strengthen the film.

Was this based on the legend of the lost works of Hemmingway? Was Hammond penning a confession as to the secrets of his own success? What happened to Jansen after he comes clean to everyone around him, or does he ever at all? By leaving this much open, it becomes a more thoughtful work that is both entertaining and thought provoking. There are some lull moments of the film, and it does get rather complicated as we are shown a flashback within a novel within a story, which is a framework of the film, but if you pay attention, you will leave satisfied.

Three stars out of four.