Every now and then a great love story comes along. Press Pass LA had the privilege to chat with actors turned indie filmmakers Amanda Markowitz and Bradley Fowler, who are proud to be creating, writing, producing, and starring in the film that hopes to claim your heart next, Love.Meet.Hope.

This passion project is being funded through crowd-sourcing site IndieGogo. It tells the story of Morgan (a recent divorcee) who finds himself at his grandmother’s wake and becomes inspired by his grandfather’s tales of how he found love. These tales are all part of a book called Love.Meet.Hope. The idea is, once you choose hope, anything is life is possible.

Q: What inspired you both to want to create this project after meeting in acting class together?

A: Brad and I are both very positive people with a true passion for life and art. After we met, we found that we had a lot in common and shared very similar perspectives on life. We truly feel that as actors, we have an opportunity and a duty to spread positive messages to the community. So, it made sense that we both expressed a strong desire to create a project that would instill hope in each and every viewer. That even amidst tragedy and unexpected circumstances, there is still hope. We also wanted to bring back the fantasy aspect of love stories, which is a big component of our film. And as actors, we wanted the opportunity to explore a wide range of human emotion and experience and the way in which the film is structured, we are able to find ourselves in so many different roles, which is truly special as an artist.

Q: If you had to sum up the film in a few sentences, how would you describe it?

A: Morgan (our protagonist) reluctantly accepts the forces of nature that are out of his control, and in doing so, he experiences a victory that comes with his ability to ultimately smile. It is through the choice to maintain hope that this inspirational story is born. That’s all we can say without giving too much away!

Q: Digital technology has allowed a lot of new filmmakers to create their own content…how have you found the crowd-funding route?

A: Fundraising is a major obstacle to getting any film off the ground, especially an independent passion project like ours. We wanted to reach out to our friends, family and the entire community to help us make our project a reality. We feel sites like Indiegogo are invaluable resources because they allow us to reach out to our peers and community more quickly and effectively. It is beautiful in that it allows artists to create and encourages people to support one another. So far, we are about half way through our campaign and we have raised a little over $4,000. We still have a long way to go to reach our target of $18,000, but regardless of the outcome, it is important to us to spread the word in general about our project. Obviously, we want to raise funds, but we also want to raise awareness of our film overall. I have been amazed by the positive response I have received from the community, including people who I have never met that were inspired by the story behind our project. We are not just looking for monetary donations, people can greatly help by using social media outlets like Facebook and Twitter to spread awareness about our film.

Q: This is an atypical story format, with each chapter being its own short and coming together to create one feature. What were the challenges in that? Do you think in the end it will be well received?

A: The short stories within the film are only a small part of the film’s entirety. They are all independent chapters of a book that our protagonist, Morgan, finds. It is a book entitled Love.Meet.Hope. that his grandfather wrote for his grandmother about different fantastical and serendipitous ways in which they meet for the first time. They are each stories about love and hope and they inspire Morgan, who is recently divorced, to once again open his heart to love.The film switches between the present day and scenes from the book, which Morgan brings to life with his imagination. We think the film will be extremely well received because these stories appeal to every type of audience, since each chapter is very distinct in its genre. The film also brings back a level of fantasy into love stories that recent films have moved away from. So, whether you like action or romance, comedy or drama, the film has it all.

Q: What are your plans for the film once you wrap post?

A: We are definitely planning to take this film on the festival circuit. We are very confident about its ability to be well received in that arena. We also plan to reach out to different distribution outlets, such as Hulu and Netflix, to help our story reach as many people as possible. 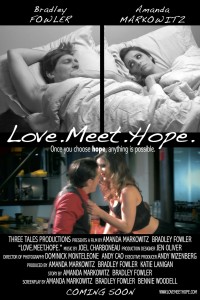 Q: What do you hope audiences take away from the film, both in regard to the themes of love and hope but also in regard to independent, self-financed filmmaking?

A: We hope to inspire people to continue to pursue love and follow their dreams, even if obstacles get in the way. And that is in direct correlation to indie filmmaking. Our hope and determination to produce this film has to be greater than any obstacle we encounter, which is also the case in any love story. We are actors and artists first and foremost because we love the craft of story telling. We feel fortunate that we have an opportunity to bring something so special to life and share it with the world. As challenging as it may be at times, we love that we get to spend our days pursuing a career that we have so much passion for and we know that comes through in our film.

To support this project visit Love.Meet.Hope on IndieGogo.