To be honest, when I first saw the trailer for Lucy, I was almost positive that I would end up bypassing it. In the end though, due to the incredible amount of television reminders for it, enough curiosity was sparked within me to at least check it out. 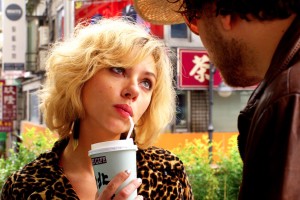 The movie follows Scarlett Johansson, portraying the titular character of Lucy; a naive, party-going American woman, who lives in Taipei, Taiwan while studying abroad. Tricked into delivering a mysterious case to a Korean drug-lord known as Mr. Jang, Lucy ends up with a package of dangerous drugs called CPH4 – with the ability to increase the brain’s function capacity – surgically tucked into her lower stomach. After being kicked in the stomach by her captor, the package within her splits, and the drugs are leaked into her system. The film then proceeds to follow her journey as she attempts to get revenge, and save her life, with of course the help from a knowledgeable professor called, Samuel Norman.

Now, first and foremost, this movie definitely is not for the faint-hearted. This means that if you are prone to getting queasy, this is not the flick for you to be watching. Coming from a realistic viewpoint however, if you were to be abducted in the same way as Lucy, then of course the first half hour of complete gore and merciless killing is completely understandable and negotiable for the writers to be doing. Although a part of me still wonders if there would have been any way at all for them to pace the film a bit slower, just to give the audience a chance to breathe before infusing another cringe worthy scene into their brains forever. I’m not exactly sure how they could do that myself, but at least I can report back that the acting for those scenes on Johansson’s part was extremely believable. Not just an uncontrollable crying type of acting either, but the true, “so horrified that you don’t know how to react” kind of acting.

However the parts that seemed to capture my attention the most were the parts that contained little bits of narration from Lucy, and the parts in which Professor Norman was in fact teaching. These parts are pertaining to humanity and all that we have to offer. And since this film is set in our time period, it’s quite plain to see that in a sense it is slamming what we as humans are doing with our lives. We as humans focus on time as opposed to, well, essentially anything else. As Lucy’s brain capacity expands, she is able to look into her past and realize that time is less of an important thing. Though while time can be a confusing subject to try and understand within the span of a movie, it’s the entire idea of Lucy gaining more knowledge from the drug increasing her brain power, that can be looked at as both a metaphor, and a literal message for us. As a literal message, we learn from Lucy’s point of view that the more she learns, the less she feels. 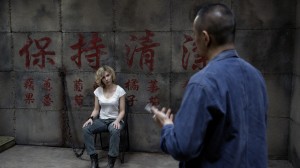 The entire concept of Lucy no longer being able to feel pain anymore, or the obvious transition seen as Lucy’s character is driven from an emotional wreck to an emotionless person, goes to show this. She learns more and feels less. But in a metaphor type of light, we can look at it as though those in the world with lots of power (as opposed to knowledge) can also be compared to being emotionless. A most certain example of this is the drug-lord himself, Mr. Jang; a powerful, rich, body-guard clad leader. Yet it is from the beginning that he is regarded as heartless, while Lucy only begins to tumble in that direction throughout the film. A fine metaphor indeed, because after all, knowledge is power and power is knowledge, right?

Near the beginning, it flashes back and forth between Lucy in Taipei, surrounded by humans, to animals in the wild, acting in similar ordeals to the humans. An interesting way to start the film, but definitely not the first time it was done. One could say that the film lacked a bit of gumption to continue the animal to human comparisons straight through it’s duration, however I believe that it’s main purpose to start off the film that way was to set the building blocks, so to speak, of it’s humanity slams. The switching between humans in reality to animals in the wild was choppy, distinguishable, and once you’ve seen the movie and can take another look at it, it kind of seems like the bow wrapped on a present before you open it.

Aside from the main concept of the film, everything else wasn’t exactly spectacular. There was far too much action for anyone to get a chance at getting to know the characters, and the tiniest details they included to attempt to give us a look at Lucy’s background seemed unnecessary. The visual effects were decent, considering they were varied at times between startling takes on Lucy’s excessive powers or just subtle hints at them. To top it off though, I was most definitely not a fan of the climatic scene where there was silent gunfire and strange opera music playing in the background.

In the end, the film made a few prominent points, however it wasn’t quite enough to be a fully memorable one.