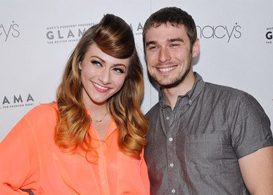 On September 7th we attended a fashion show, concert and HIV/AIDS fundraiser all rolled into one awesome event! Macy’s Passport Presents Glamorama celebrated its 30th anniversary at the Orpheum Theatre in downtown Los Angeles. This year’s theme was “The British Invasion: The Music Then. The Fashion Now!” Glamorama will benefit AIDS Project Los Angeles and Project Angel Food.

We had a chance to chat with Laura Schara, the Fashion Director for Glamorama. Laura summed up this fabulous event as being Macy’s fall fashion kick-off event “Combining models, rock and roll, Fall fashion all together which kind of is the perfect equation for a perfect night. And of course we have the infamous after party that follows afterwards.” When asked how this year was different from past years, Schara said, “This year with the British Invasion theme, we’re really celebrating British pop icons from the past 50 years. It’s the 50th anniversary of The Rolling Stones and The Beatles. The Olympics happened. So there’s a lot of the Brits are invading the US, not only in music but also in fashion too.”

Guests enjoyed Fall fashions from Rachel by Rachel Roy, Sean John, Calvin Klein, Material Girl, Tallia Orange, Tommy Hilfiger, bar III, W118 by Walter Baker, Diesel and Nicole Richie for Impulse. This wasn’t your ordinary fashion show though. There were lively dance performances, colorful kaleidoscopic images of the models as they walked and other vibrant scenes, intricate choreography by Myron Johnson, props that included a huge spinning record on the stage, models coming out of a phone booth and half-naked men modeling underwear for Diesel!

To top it all off, there were great musical performances by Robin Thicke, Pop Duo, Karmin (Amy Heidemann and Nick Noonan) and YouTube sensations, Meg & Liz. Chairman, President and CEO of Macy’s Inc., Terry Lundgren gave a heartfelt speech about how Elizabeth Taylor started the charity event to benefit HIV/AIDS and how it has raised over $30 million over the years. Actress, Sharon Stone also touched the crowd with a speech about HIV/AIDS and how important it is to give back. Sean “Diddy” Combs even made a quick appearance on stage to wave to the crowd.

Afterwards, we headed over to the California Market Center for the VIP after party. The British had definitely invaded the venue! It was decked out with British flags, famous street signs, a red phone booth for photographs, several food and dessert stations and even guys dressed up like British Guards at the entrance. This was definitely one of the best events of the year!

Check out our Youtube video from inside the show here.