Mad Max: Fury Road is without a doubt one of the best action films to hit cinemas in decades. From start to finish it pulls you in and never lets you go. Rarely does one go into a movie knowing they are watching a movie masterpiece but Fury Road has all the indications of a certified classic.

That being said it is kind of amazing the film exists in the first place. For those keeping count the last Mad Max movie was Beyond Thunderdome released in 1985. Back then Mel Gibson was still the original Max and the series was already a trilogy. There had been talk of another sequel in the pipeline for years but Gibson’s highly publicized rants and age had started to become serious road blocks. 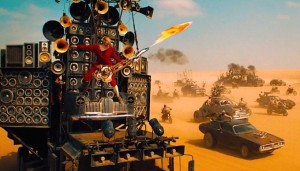 But with George Miller at the helm and Tom Hardy replacing Gibson (a perfect choice) the series is back on the road better than ever. The story is relatively straight forward. Max is a nomad of the Australian post-apocalyptic wasteland and has been for quite some time. A former policeman who went rogue after his family was murdered Max is a man searching for redemption in a world without hope. Mankind has mutated and everyone has lost their minds.

Saying anything more would ruin the surprises of the movie and that in itself is a crime. A huge draw to the film is Miller’s old school approach to action.  Instead of filling the science fiction epic with CGI, something that wasn’t available 30 years ago when we last visited the wasteland, almost the entire movie is done with practical effects. Given how strange and twisted a world he has created that is astounding. What they do with cars in this movie makes the Fast & Furious films look like stock cars. The bar has been raised.

Like the Westerns of old Hardy goes through most of the movie without ever speaking his name. Part of this is due to the fact that he’s harnessed to a car with a muzzle of his mouth for a good portion of the film but he remains a quiet, mysterious force. That allows the secondary characters like Imperator Furiosa (Charlize Theron) and Nux (Nicholas Hoult) to take center stage giving the story a lot more depth than you would expect from such an action packed movie. Indeed, instead of Max it is Furiosa at the heart of the story turning Charlize Theron into a bona fide action star.

The film does what all good science fiction should do, which is tackle major issues but do it in a way that you barely notice. This is being called a major “feminist” movie but that point is never forced and in fact seems to drive the plot rather than bring it to a grinding halt as in most films. Needless to say Theron and her band of brides kick quite a bit of ass along the road to ruin.

People will be talking about Fury Road for years to come as it almost rewrites the rules of action cinema. More to the point it seems to herald the return of truly dangerous movie making. Not so long ago the simple act of watching a film felt like an act of rebellion. That danger courses the veins of Fury Road as watching it becomes an experience. Find the biggest screen you can.